A Seventh-day Adventist woman from Cuba received an honorary Doctor of Divinity from the Adventist Theological Seminary at Andrews University during the institution's graduation ceremonies on May 3, 2009

Esther Diaz Guerrero, former dean of the Adventist Seminary in Havana, Cuba, was the keynote speaker for the commencement and among a handful who were honored for their service and contributions in the Adventist work.

Diaz was recognized for her service at the Cuban Adventist Seminary where she served as dean for over eight years and for her efforts on behalf of women's issues in the church. She was a key member in creating curricula, strengthening the academic and library resources as well as ensuring the seminary's financial stability. Her responsibilities included college professor, chaplain, and coordinator of women's ministries.

She shared the inspiration that she received from queen Esther who fought against all odds.

“I am not sure why the Lord inspired my parents to name me Esther, but I am sure that I was born with a purpose. In the same way that that young-lady faced difficulties, I have faced my share of them. I come from the beautiful island of Cuba, where the Lord placed me to lead for 8 years the only SDA institution in the country, I never imagined that the Lord would have led me for such a time as this.” said Dr. Diaz.

She spoke about the other Esthers who remain in Cuba, who have studied in Cuba's Theological Seminary and serve the church taking care of churches, departments and

other positions of leadership. Diaz challenged the graduates to do everything with all their might as they honored God in everything.

“This morning we celebrate the successes that you have obtained and the Lord has given me the privilege of being here to share those successes. It is a pleasure for me to join you on this special occasion and congratulate all the graduates for having reached one of their goals in life.”

Dr. Diaz retired late last year but continues to support the Cuba's seminary which grants bachelor degrees in theology to men and women every year who are committed to spreading the gospel on the island. 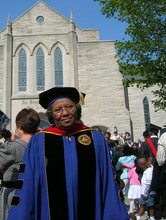