Seventh-day Adventists from Bogota participated in the Media Maratón Internacional de Bogotá (Bogota’s International Half Marathon), one of the most important annual marathons in Latin America. The event, which took place July 31, drew about 45,000 runners. Among them were some 300 church members who not only ran, but also took the opportunity to witness.

It was an initiative that was led by the church in the Upper Magdalena Conference and the South Bogota Region to mark the 90-year anniversary of the church history in Bogota.

“We are really happy to see how our brethren went out into the streets to testify and motivate those of us who were running all dressed with our special T-shirt showing our church,” said Edgar Avella, director for evangelism in the Upper Magdalena region and organizer of the activity.

Adventist runners and the hundreds of church members wore an official T-shirt commemorating the 90 years of Adventist presence in Bogota. Church members also distributed 8,000 copies of the missionary magazine called Priorities to spectators.

“This is the first time that our church in Bogota makes itself present in such a massive event like this Media Maraton of Bogota,” said Pastor Hector Julio Arias, executive secretary of the church in South Colombia. “It was a great opportunity to testify and reconfirm our health message in our Adventist community through exercise and physical resistance.”

Media Maraton of Bogota in its 12th annual event gathers the best athletes around the world. It also attracts national and international members of the media, delegates from 34 countries and more than one million spectators.

Most church runners participated in the 10 kilometer race on a course designated for amateur athletes, organizers said.

As runners crossed the finish line in the 10 km and 21 km courses and later collected their medals, more than 250 Adventists gathered to sing hymns themed on the second coming of Jesus.

“Competing in the 21-kilometer race is not easy because here’s where the elite runners race,” said Octavio Herrera Cifuentes of the Suba North district in the Upper Magdalena region. Herrera, who was the first Adventist to complete the 21 km, said he believed that the objective of testifying and reaching the goal was met.

“We who are Adventist have a very big advantage and it is our healthy lifestyle, and the messages of good nutrition allows us a better condition for this type of events.

“Without a doubt, the activity was very positive and we are already hoping to make our church presence in 2012,” said Avella.

The church will continue to hold several activities commemorating 90 years of Adventist presence in the city. Among the events planned is a week-long evangelistic campaign in late October.

The church Bogota has more than 30,000 church members worshipping in 120 churches.

For more information on the 90-anniversary activities of the church in Bogota, visit www.bogota90salvacionyservicio.org 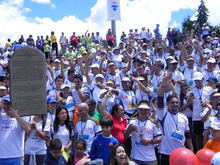 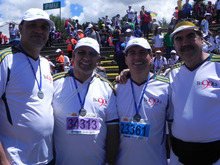 From the World Church, RSS English
Belief #24: Christ’s Ministry in the Heavenly Sanctuary—Part 1

From the Field, RSS English
Adventists Impact Dozens of Communities During Annual Initiative Across Venezuela