Inter-America’s 12th Adventist-laymen’s Services and Industries (ASI) concluded its annual conference in Antigua, Guatemala, on Aug. 18, during which Adventist professionals and leaders renewed their commitment of uniting businesses with the church in reaching communities with the gospel of salvation.

More than 200 attended the four-day conference which brought together Adventist business professionals for seminars, exhibitions, ministries, presentations and musical performances.

“The world is dying not merely because of physical hunger but from spiritual hunger,’ said Dr. Marston Thomas, president of ASI Inter-America, as he spoke to this year’s delegation. “I call you to take conscience of the needs of this world and empower other ASI professional delegates so that the world may know that Jesus in the business scope.”

The convention was themed after the third phase of revival and reformation initiative promoted throughout Inter-America: That the World May Know-an initiative which hits at the heart of ASI and its purpose, said Thomas.

Although ASI has always been about sharing Christ in the work place, in partnership with the church in spreading the gospel, said Thomas, “Our aim was to motivate ASIers to go back to their world and let them know.”

The convention was highlighted by special daily prayer and testimonial sessions among the delegates.

Participants at this year’s convention gathered to network, sat in on professional development and business management seminars, strengthened on-going projects and new projects to benefit the community, and more.

Pastor Israel Leito, president of the church in Inter-America, spoke during the event. He reminded delegates to ensure God is part of their business endeavors.

“You are here because you have reached success or are looking to be more successful,” said Pastor Leito. “No one can have success alone. The spiritual success is not because of my own efforts but it will be because of the strength of the Lord Jesus, and so the business success is not yours either, because Christ helps you,” added Pastor Leito as he challenged the delegation to make Christ the center of their lives.

“There are churches that pretend to be saved but confessing God to a dying world is something optional,” said Folkenberg. “The role of ASI is to be part of a spiritual heating system to mobilize all our friends around us, so they can confess the truth that Christ is coming soon and it is time for us to urgently prepare for that,” he concluded.

A special offering was collected during the convention to go towards evangelistic efforts among Chinese communities in the Caribbean region and towards the purchase of satellite antennas and receivers so that Hope Channel/Esperanza TV-the official channel of the Adventist church-can be viewed by 14 million viewers through the 512 cable companies in Guatemala.

“ASI leaders continue to work towards increasing the number of ASI chapters in Inter-America,” said Pastor Leon B. Wellington, vice president for the church in Inter-America and secretary of ASI-IA. “The goal has always been to have one chapter organized in each of the 22 church regions throughout the territory.”

ASI currently has 11 chapters, and creating more chapters will continue to be a priority, said Pastor Wellington.

The next ASI Inter-America Convention is scheduled to be held in San Jose, Costa Rica, in August 2013.

ASI is an organization of the Seventh-day Adventist Church members who work in the private sector. Accordingly, they believe that vocations can be and should be a ministry to aid in the advancement of the great gospel commission. ASI is committed to supporting the Seventh-day Adventist church and its various outreach programs, which include health, education, evangelism, community services, family concerns and special projects.

Gustavo Menendez contributed to this article

To view a photo gallery of this year’s ASI-IA Convention, click here 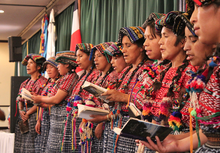