In what is termed a historic occasion, Reverend Wayan Wellington of the New Testament Church of God, became the first non-Adventist to graduate from Northern Caribbean University’s (NCU) Master of Arts in Religion program earlier this month.

Rev. Wellington, who serves as the National Youth Director of the New Testament Church of God in Jamaica and Grand Cayman earned his graduate degree with emphasis in the New Testament, after two and a half years of study. He received his diploma during this year’s commencement exercise at NCU’s main campus in Mandeville, Jamaica, Aug. 12, 2012.

“The experience with Rev. Wellington was refreshing and effervescent,” said Dr. Newton Cleghorne, dean of the School of Religion and Theology (SRT). “He was open-minded and willing to be challenged. His participation in the course gave us an opportunity to share with the wider religious community, which is a part of our philosophy in the SRT. We currently have four students at the undergraduate level from Sabbath-keeping Churches who are completing their studies in the bachelors of arts in Religion.”

Wellington is the fourth person to graduate from the master’s program since it was introduced in 2009.

“Normally individuals from my church would move on to do these course at Caribbean Graduate School of Theology (CGST) or Jamaica Theological Seminary (JTS), but I chose to do the course at NCU to get a different experience, something new, something fresh,” said Rev. Wellington. “In addition I was stationed at one of our churches in Georges Valley, Manchester, which made it easier for me.”

Wellington found the lecturers excellent and a great opportunity to fellowship with other students in the program.

“The atmosphere was a comfortable one, with open and frank people that did not make me feel out of place,” Wellington continued. “We had intense discussions, but mature ones, which in the end gave me a different viewpoint and I now have garnered a greater deal of respect for the Adventist doctrine and belief.” 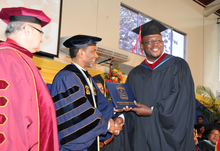