Hundreds of Seventh-day Adventists throughout the south central region in Guatemala marched against the prevalent violence toward women and children in the cities of Escuintla, Antigua Guatemala, Villa Hermosa and San Miguel Petapa, late last month.

Holding signs, banners, and in caravans through the main streets and avenues, Adventist students, young people, and adult church members promoted peace in the home and spread messages of hope in Jesus to onlookers throughout the day.

“We wanted to use this opportunity to call on the Guatemalan society to put an end to abuse and domestic violence,” said Rosita Hernandez, women’s ministries director for the church in the south central region and organizer of the marches.

“We want the community to know that the Adventist Church respects the rights of individuals regardless of their race, gender or creed, and that we want a unified family where the love of Jesus can reign,” added Hernandez.

In a society infested with violence against women and gangs, the marches were designed to let women know that every Adventist Church is a place of support for prayer and counseling needs, she explained.

“We want to tell women that they have the right to be happy, respected, and loved,” continued Hernandez, “That God understands them, gives them peace and freedom.”

In the city of Escuintla, Rafael Urquilla, a district pastor marched with a group of members sending a clear message against the violence affecting the region.

“We raised our voices today to say ‘No more violence’,” said Urquilla. “We want victims to know they can speak up, and find where to go for help.”

Onlookers were treated to music and given the opportunity to have people pray for them.

The marches were covered by the local press and television media.

More marches are planned to take place in the region in the coming months. As part of the initiative the women’s ministries department in south central region has organized church members to visit orphanages, hospitals, and health centers.

Enditnow is a joint initiative of the world church’s Women’s Ministries department and the Adventist Development and Relief Agency. For more information, visit http://enditnow.org

For more on the Seventh-day Adventist Church in Guatemala, visit www.uniondeguatemala.org 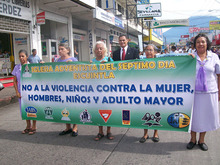 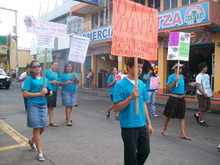