A rapidly growing Seventh-day Adventist college in the state of Florida is the country’s latest church institution of higher learning to become a university, reflecting its increasing number of graduate program offerings.

Established in 1992, much of its growth in recent years stems from increased distance learning options, which Education leaders for the church in North America have lauded as an example for other schools. About half of current students study on campus.

ADU had a 55 percent enrollment growth between 2006 and 2010, which made it the fastest growing Adventist institution of higher learning in the United States during that time period, according to records from the most recent Adventist world church statistical report. Both Southern Adventist University in Tennessee and Kettering College of Medical Arts in Ohio experienced a roughly 28 percent increase during the same period.

The school offered its first graduate degree, in nurse anesthesia, in 2008. It began a master’s of occupational therapy last year. Next year, the university will launch a master’s degree in healthcare administration, followed by a doctorate of nurse anesthesia practice in 2014.

A university executive said officials are also developing a doctorate in physical therapy and a physician’s assistant master’s degree. Later, the school will likely add a doctorate in pharmacy.

University officials said they also added the word “Adventist” to enhance the school’s reputation as one with a Christian mission.

“We’re known here in Florida and in the Adventist Church, but as we grow it helps to make our spiritual mission better known to the community that we are a faith-based institution,” said Don Williams, vice president for academic administration.

Florida Hospital, a network of eight hospitals in Orlando and 13 across the state, is the largest healthcare provider in the state of Florida. It was prominently featured for its use of new technology and holistic care in the 2010 film “The Adventists,” an independent documentary about Adventist healthcare in the U.S.

Florida Hospital is part of the Winter Park, Florida-based Adventist Health System, the largest Protestant healthcare provider in the nation.

He said he views the institution as a “mission-school” model.

“We work not only with the Adventist community but bring in the community and see if we can have a positive influence on their lives,” Williams said.

He added that the president interviews every new hire for “mission fit,” from faculty and administration to housekeeping staff.

Much of the university’s enrollment growth came from the school’s increase in distance learning capabilities, including a site at Porter Adventist Hospital in the state of Colorado.

An Adventist Education official called the ADU one of the church’s “premium online distributors.”

“It’s been innovative in finding ways to use technology to deliver education to academies and other places outside of their local community,” said Larry Blackmer, vice president for Education in the church’s North American Division. “I value the technology that they showcase and mentor to the rest of the Adventist educational system.”

For more information see the school’s website at adu.edu. 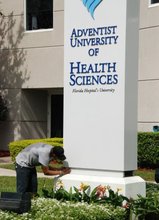 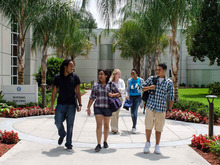