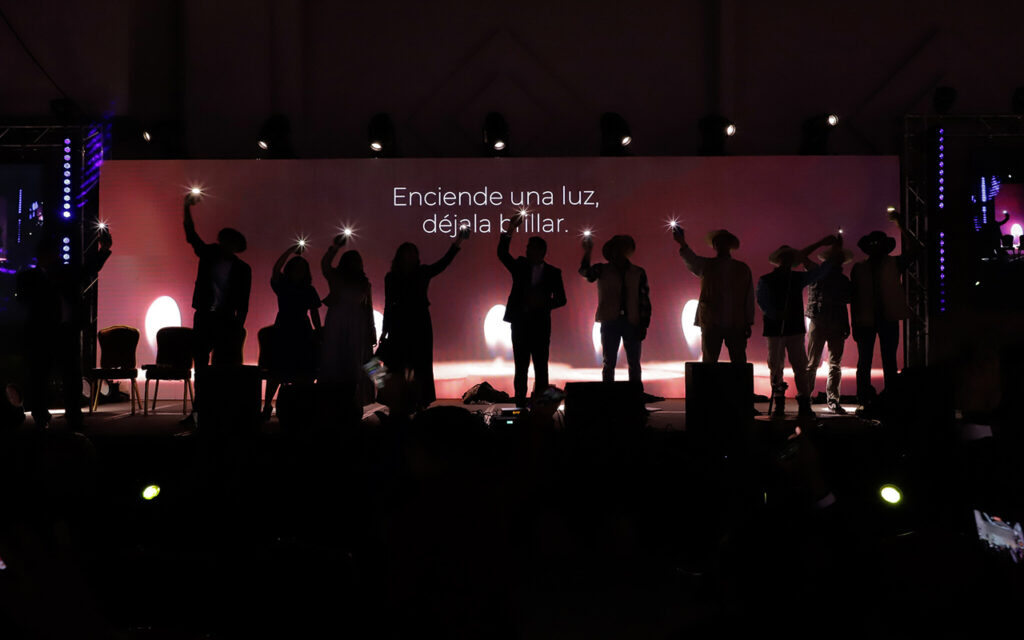 Young people shine their lights on stage and motivate lay delegation at the Inter-American Division’s Festival of the Laity in Panama City, Panama, to shine the light of the gospel wherever they go. More than 650 lay evangelists and church leaders took part in the closing ceremony of the event held Aug. 4-6, 2022. [Photo: Ariel Morales/IAD]

“There are many across the territory who are waiting for that moment to give their life to Jesus because they have received the light of the gospel,” said Pastor Elie Henry, president of the Inter-American Division (IAD), as he was making the final charge to the more than 650 lay evangelists and church leaders gathered during the last day of the IAD’s Festival of the Laity held in Panama City, Panama, earlier this month. “And we must continue to testify and advance the mission,” he said.

“Our church continues marching on and only stops to baptize. That’s Inter-America,” he continued. “But we must remain committed as church leaders, pastors, and laypersons to sharing the message of salvation with greater member involvement and impact the territory even more.” 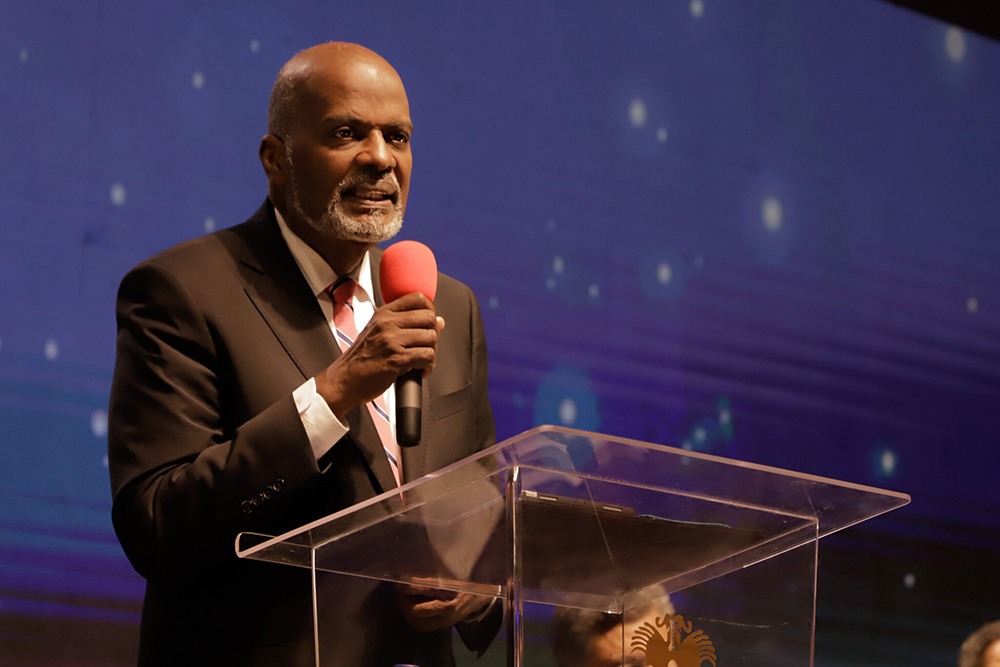 IAD President Pastor Elie Henry delivers the  spiritual message and charge to the more than 650 laypersons and church leaders from throughout the territory during the Festival of the Laity, Aug. 6, 2022. [Photo: Ariel Morales/IAD]

Pastor Henry appealed to laypersons and ministers to cling to the Word of God and trust in His providence as they keep the spirit and passion for mission work.

The festival was part of evangelistic initiatives and activities commemorating the centennial anniversary of the IAD since it was officially established in 1922.

“There are still many more to reach before Jesus comes, said Pastor Henry. “Our utmost concern should be helping persons to find the eternal peace only found in God.” 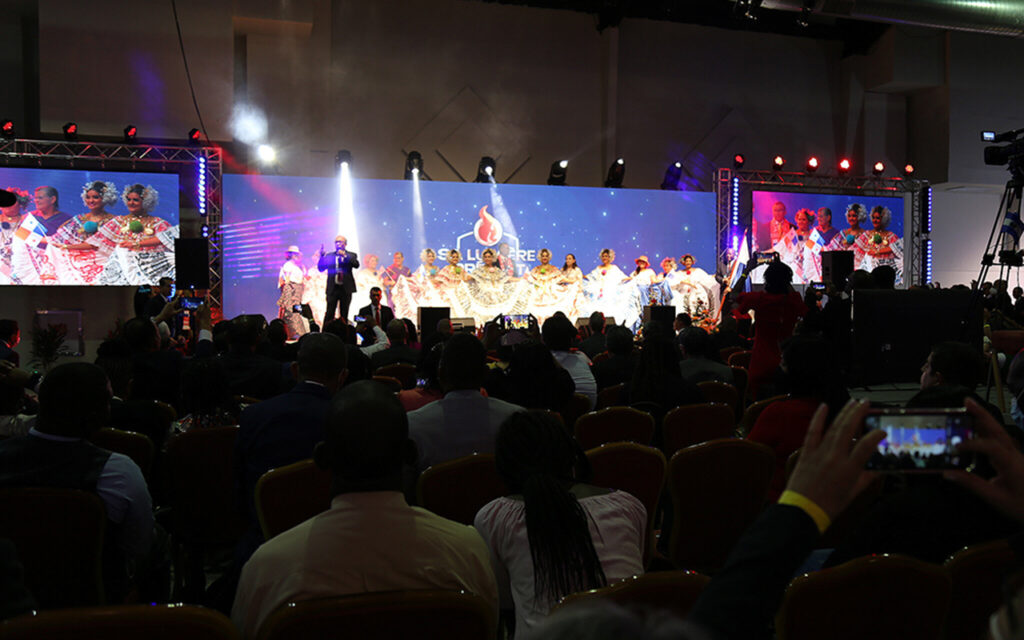 Adventist leaders  in Panama present a report on the growth of the church across the country thanks to the. joint efforts of the laity and pastors. [Photo: Libna Stevens/IAD]

Pastor Henry praised the tireless work of church leaders and lay evangelists in Panama for reaching the 100,000th member in that country. Jose A. Iglesias Torres was baptized during the worship services as festival delegates cheered on. Iglesias, a business owner in Panama City, has been part of a special small group created to reach upper class individuals in urban areas.

“This is a dream come true to reach a membership of 100,000,” said Pastor Jose De Gracia, president of the Panama Union. Before the Panama Union was formed in 2015, it had 40,000 members and was part of the South Central American Union.  As the centennial celebrations approached this year, church leaders and lay evangelists doubled their evangelism efforts to reach more than 7,000 new believers. “Our church would see an average of 3,500 baptisms each year, but this year has been historic thanks to the extraordinary commitment of our lay members,” said De Gracia. “And the year is not over yet.” 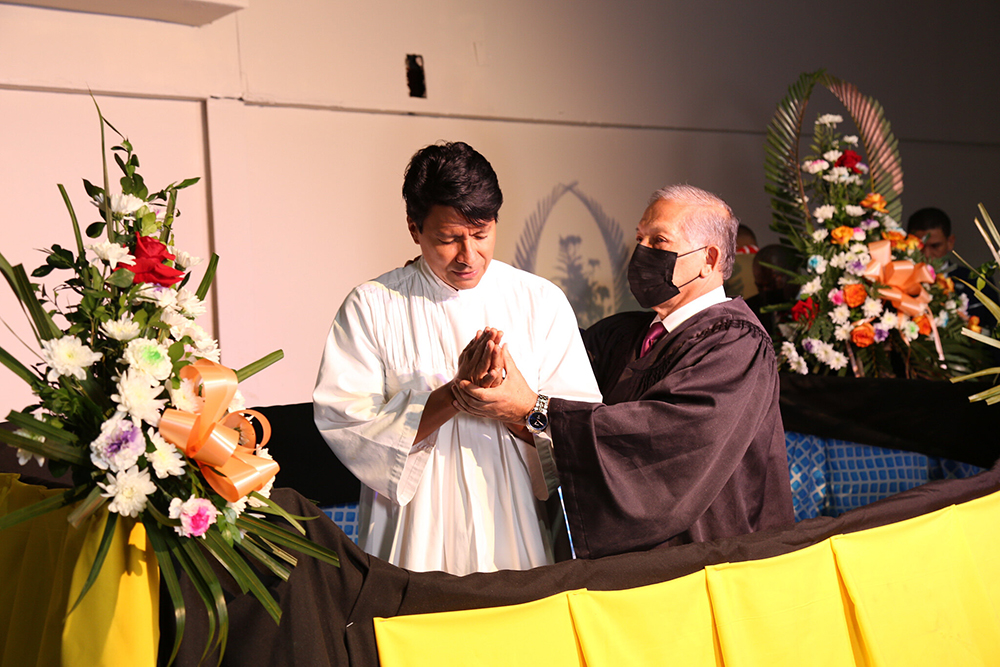 Minutes before Jose A. Iglesias (left) officially becomes the 100,000th member to join the Seventh-day Adventist Church in Panama through baptism on Aug. 6, 2022, by Pastor Jose De Gracia, president of the church in the Panama Union. [Photo: Libna Stevens/IAD]

Themed “His Light Prevails”, the festival gathered hundreds of outstanding laypersons from Aug. 4-6, 2022, to highlight the crucial role the layperson in Inter-America plays in growing the church, said Pastor Melchor Ferreyra, personal ministries director of the IAD. The festival comes after a 12-year hiatus since the last time the IAD held a Festival of the Laity in 2010.

Ferreyra reminded the lay delegation about their important contribution to advance the mission of the church while pointing to the overall initiatives that fall under the IAD’s strategic plan to evangelize, educate, and serve the community. “We want to accomplish more through discipleship, while preparing, motivating and inspiring others to be totally involved in the mission of spreading the gospel,” he said. 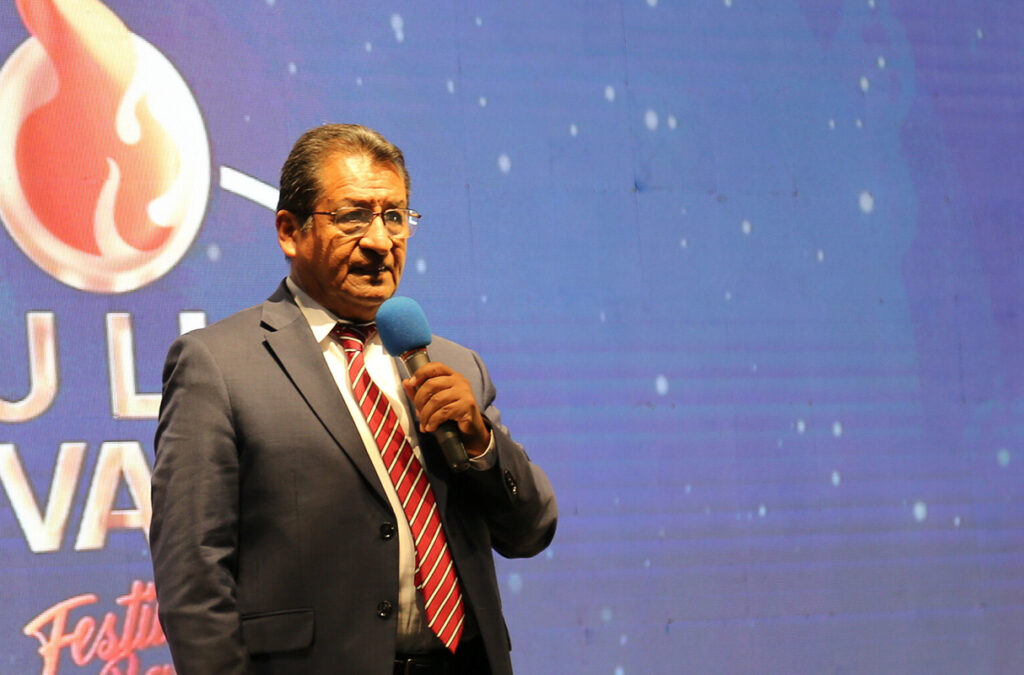 Delegates were presented with new resources that can assist laypersons in the task of discipleship. 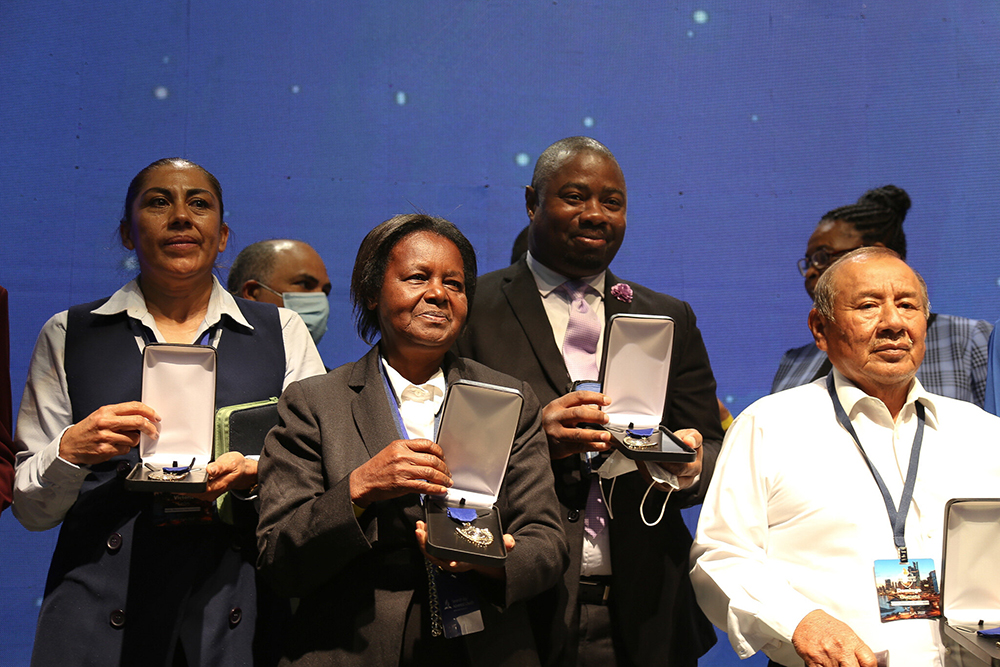 Lay evangelists display their medals after they were awarded them for their outstanding work in sharing the gospel in their territories. One layperson for each of the 24 unions in Inter-America was recognized on Aug. 6, 2022.[Photo: Libna Stevens/IAD]

“Proclaiming the good news of salvation has always been at the core of our mission, and I know that with the dedication and passion for mission among our lay members, we can reach that goal,” Ferreyra challenged.

A layperson from each of the 24 unions in the IAD was honored for their dedication to the mission and significant contribution in growing the church in their respective region. In addition, personal ministries directors from each of the unions were also recognized, as well as Pastor De Gracia of Panama for his leadership in growing the church in Panama and facilitating the festival with his team of leaders and staff. 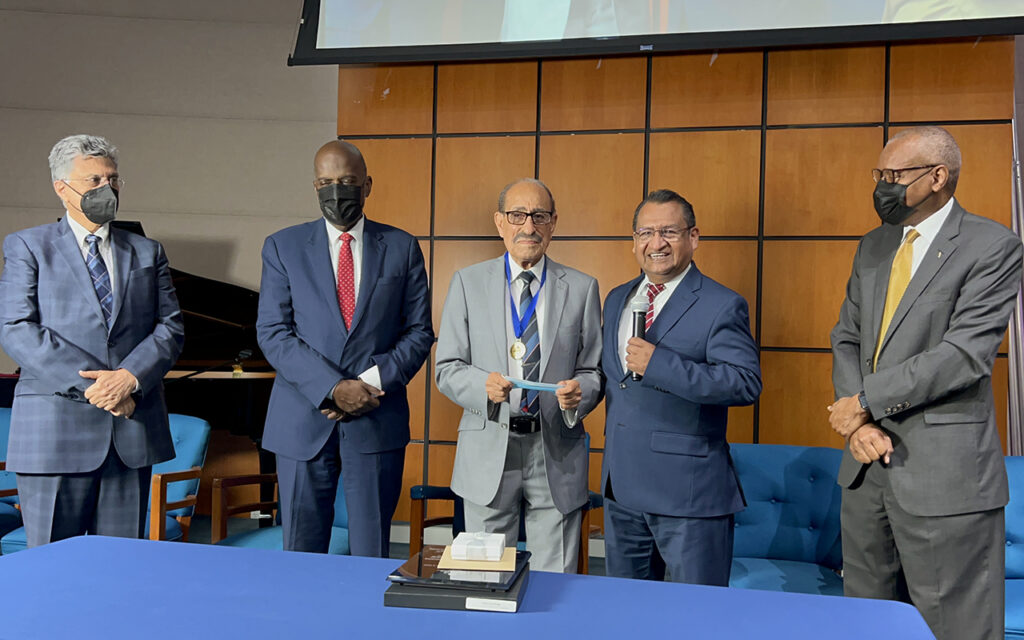 Pastor Sergio Moctezuma (center) is honored for being instrumental in training, highlighting the important work of the laity, and creating festivals of the laity across Inter-America during a special ceremony held at the IAD Headquarter Office on Jul. 18, 2022. L-R: Pastors Filiberto Verduzco, Elie Henry, Melchor Ferreyra, and Leonard Johnson. Moctezuma was not able to attend the recent Festival of the Laity in Panama City, Panama. [Photo: Libna Stevens/IAD]

Pastor Sergio Moctezuma, who led Sabbath school department and personal ministries in the Inter-American Division from the 1960s to 2000s, was honored for the exceptional leadership in providing training and guidance to thousands of laypersons across the territory.  Moctezuma organized the first ever held festival of the laity in 1969 in the IAD and in the world church.

“We want to take a moment to honor Sergio Moctezuma, he’s known as the father of the festivals of the laity, citizen of many countries in Inter-America and South America, mentor of mentors, teacher of teachers, and was not able to be with us here in Panama,” said Ferreyra. 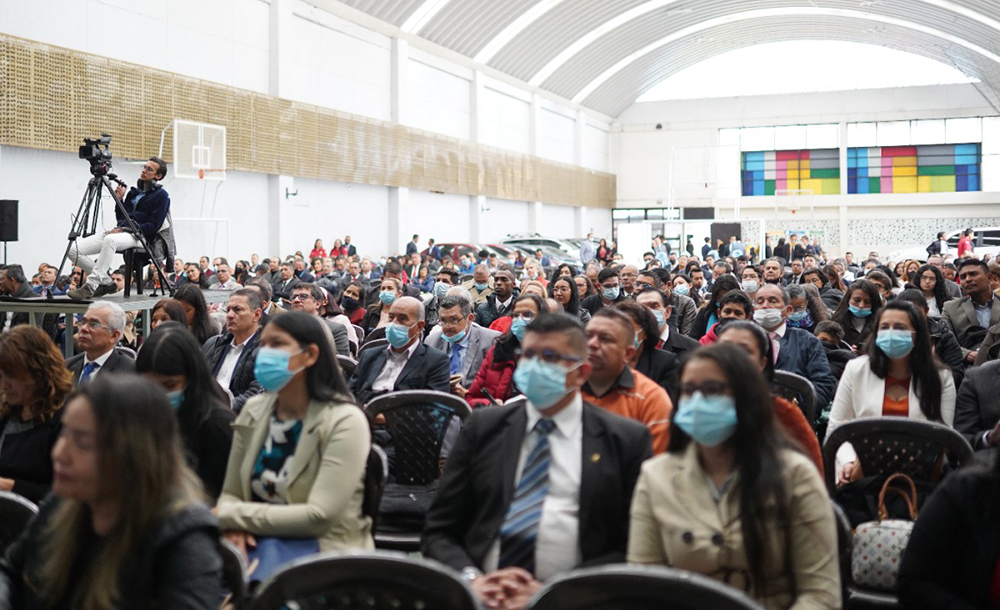 More than 700 laypersons gather in Bogota, Colombia, on Aug. 6, to take part in the live online festival event from the Adventist Coliseum of Bogota. [Photo: Laura Acosta/South Colombia Union]

Large lay delegations from the South Colombian and East and West Venezuelan Unions briefly connected online during the live program on Aug. 6, to send special greetings from their gathered locations in their respective regions.

The program also included several panel discussions on the authority of the bible, creationism, the judgement, and other pillars of the faith. In addition, the festival included prayer sessions, a drama performance, regional lay evangelism progress reports, media preaching tools and more. 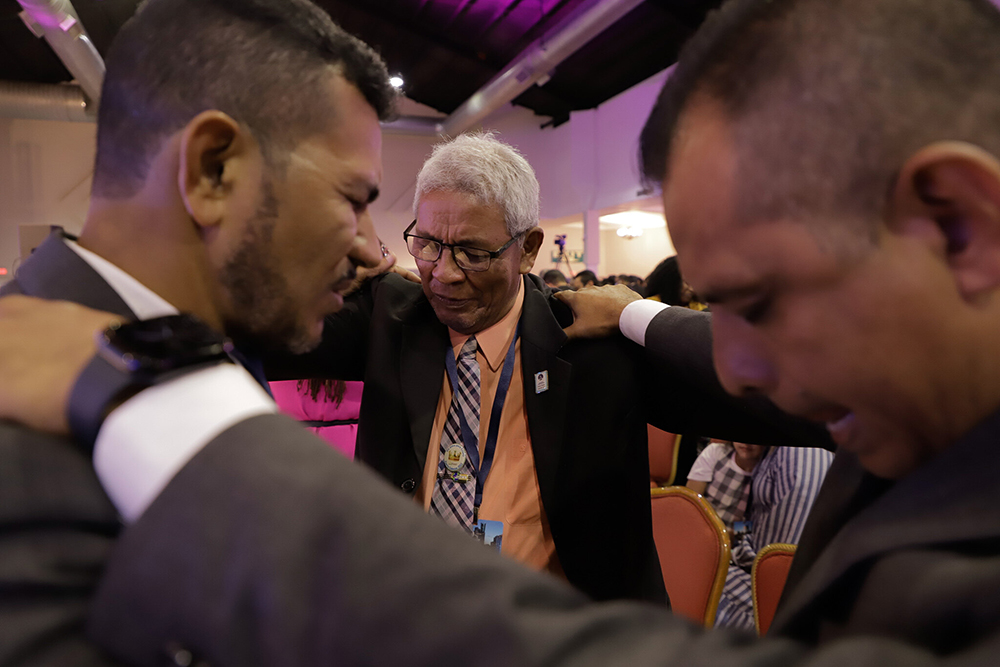 Lay delegates embrace as they pray together during the Festival of the Laity, Aug. 6, 2022, session. [Photo: Ariel Morales/IAD]

To view the online program of the IAD’s Festival of the Laity, a detailed program and keynote speakers, visit festival.interamerica.org

To view a photo album of the event, Click HERE