Panama became the seventh country in Central America where the Seventh-day Adventist Church celebrated and promoted the reading of the Bible throughout the country. The celebration was part of the Follow the Bible initiative began around the world in 2008 and throughout Inter-America just a few weeks ago.

Panamanian church leaders and members received a replica of the multi-language Bible on Dec. 20, soon after the real one made its journey through the bordering country of Costa Rica. The unique book was escorted by a caravan of automobiles, which made their way from the Costa Rican border into the City of Chiriqui in the western part of the country, through Concepcion and onward to the City of David, where hundreds awaited at Cervantes Park.

During the three-hour special program at Cervantes Park, attendees were able to walk through special exhibitions of some of the oldest Bibles in the country, a witness a special transcription of the Bible done by Adventist students throughout Panama. A special musical presentation was also given by the national police band.

Pathfinders and Master Guides gave the replica of the Traveling Bible to Pastor Vicente Meza, president of the church in the West Panama Conference, along with other church leaders.

Governor of Chiriqui Dr. Enrique Fernandez spoke to the crowd and thanked the church for the special Bible initiative. He said the Bible is a great book for humanity. “I will recommend to each of our government officials in our province to keep a copy of the Bible in their offices,” Dr. Fernandez said.

Others like Mr. Felipe Batista, director of the Transit and Transportation Office, and Mr. Donato Tapia, director of the Ministry of Social Development, took part in the special celebration which was transmitted by the church’s Super TNT 90.1 and Imagen Stereo 97.9 FM radio stations.

The Traveling Bible is scheduled to continue throughout the Inter-American territory until mid-January 2010. Although some of the 17 church regions will not be visited by the Bible during its 11-week journey through Inter-America, each church region has a replica of the unique Bible to promote the reading and value of the Holy Scriptures in their communities.

To view a photo gallery of traveling Bible in Panama, visit http://flickr.com/photos/interamerica 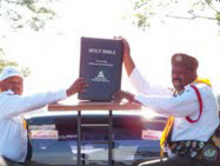