Thousands of Seventh-day Adventists in Venezuela participated in the church’s worldwide Follow the Bible initiative to promote the reading and the study of the Bible in the surrounding communities and regions.

As the unique Traveling Bible has been making its journey throughout parts of the Inter-American Division territory, church leaders and members in Venezuela, Curacao, Aruba and Bonaire joined efforts to invite their members to recommit to studying the Bible and preaching the Word of God throughout their communities.

Thousands gathered for special programs throughout the dozens of congregations in Caracas focused on the Bible. More than 2,500 church leaders and church members participated in a historic march which took place from the Madariaga Plaza to the Bolivar Plaza-the main plaza in front of the National assembly, the national capitol, cathedral and government palace. More than 6,000 fliers on the Bible were distributed during the march.

“This is the first time in five years that the authorities have granted special permission for a religious institution to celebrate a religious event in the plaza,” said Pastor Moises Prieto, coordinator of the Follow the Bible initiative in the church in West Venezuela.

A special musical and spiritual program took place in Bolivar Plaza with a replica of the multi-language traveling Bible.

Pastor Josney Rodriguez, president of the church in West Venezuela Experimental Union, spoke to those gathered and challenged them to stay faithful and firm in the reading of the Bible and sharing of the same.

For nearly eight months the church in Venezuela, Curacaco, Aruba and Bonaire joined efforts in preparation for the traveling Bible to make its way in Inter-America. Special activities such as Bible reading and Bible transcribing marathons took place throughout churches and public areas. In addition, special radio programs were aired, and state governors, mayors and other government officials were given specially marked Bibles.

Church leaders are scheduled to visit the Presidential Palace in February to give a Bible to the president of the country and his officials.

The Traveling Bible is scheduled to continue throughout the Inter-American territory until mid-January 2010. Although some of the 17 church regions will not be visited by the Bible during its 11-week journey through Inter-America, each church region has a replica of the unique Bible to promote the reading and value of the Holy Scriptures in their communities.

To view a photo gallery of traveling Bible in Venezuela, visit http://flickr.com/photos/interamerica 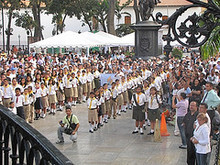 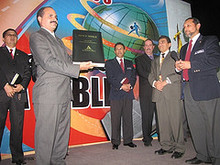