Adventists Say ‘No To Violence’ Across Inter-America 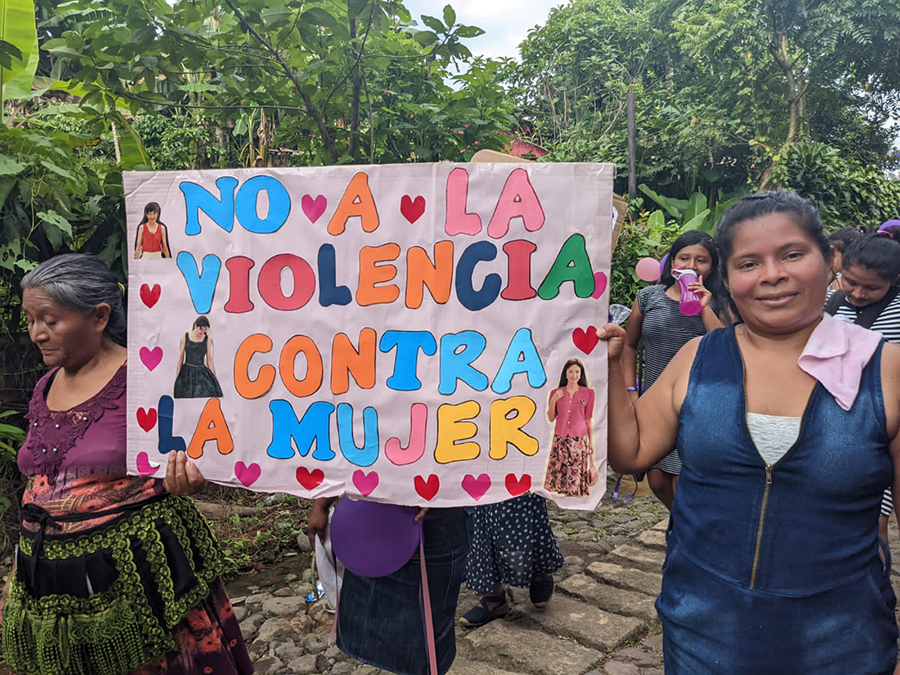 Hundreds walk with signs and posters against violence in the Palmar District, San Felipe, Retalhuleu, in the southern part of Guatemala as part of the Enditnow global annual campaign on Aug. 27, 2o22. Thousands across the Inter-American Division territory took to the streets to advocate against the prevalent violence against women and children in their communities. [Photo: Guatemala Union]

Seventh-day Adventists throughout the Inter-American Division (IAD) called for an end to violence during the “Enditnow” campaign held recently. Enditnow is an annual global initiative to raise awareness and advocate for the end of violence. It aims to mobilize Seventh-day Adventists around the world and invites other community groups to join in to resolve this worldwide issue.

Thousands marched across streets on Aug. 27, in Mexico, Central America, the Caribbean and Venezuela to take a stand against violence against women and children. 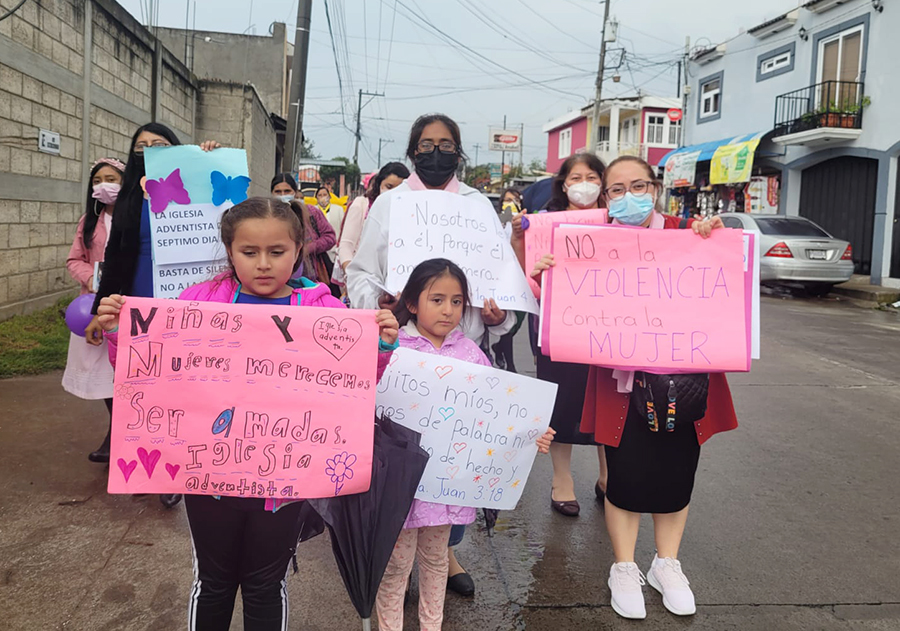 Young girls and women throughout the western part of Guatemala march with messages from the Adventist Church’s Enditnow initiative. [Photo: Guatemala Union]

For over a decade, church members across the IAD have been bringing about awareness and engaging its members to resolve the prevalent issue of the violence infiltrating society today, not only in communities but in the church as well, said Edith Ruiz de Espinoza, women’s ministries director for the church in Inter-America.

This year, women’s ministries leaders focused on highlighting “abuse of power” which can be difficult to address and not usually spoken about at church, said Espinoza. “Excessive or improper use of authority which can include lack of empathy, coercion, neglecting others and manipulation of one’s needs is defined as abuse of power,” she said. “Detecting abuse of power could be seen when others do not respect your boundaries or beliefs, when there’s humiliation, extortion or intimidation.” As Christians, it’s important to say something or speak to someone when abuse is seen or felt, she said. 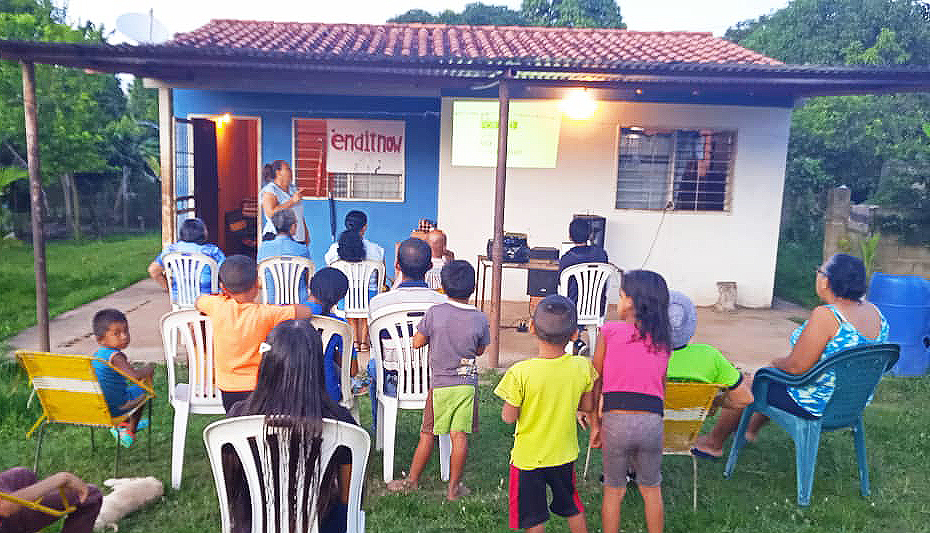 A small group in East Venezuela gathers neighbors to review how to prevent and help those who may be victims of violence during a week of Enditnow awareness campaign Aug. 20-27, 2022. [Photo: East Venezuela Union]

Thousands gathered at hundreds of churches in the East Venezuela Union to gather for a week of Enditnow meetings, seminars, and community impact activities Aug. 20-27, 2022. “We spoke on pertinent messages which included how to recognize and prevent child abuse and violence in the marriage,” said Raquel Medina de Paredes, women’s ministries director for East Venezuela Union. “We wanted to focus on holding marches and reaching out as a collective group and in a personal way in more vulnerable communities,” she said.

The week featured radio programs on identifying and preventing abuse of power as well as the distribution of literature on abuse, and highlighting presentations and messages through social media platforms. 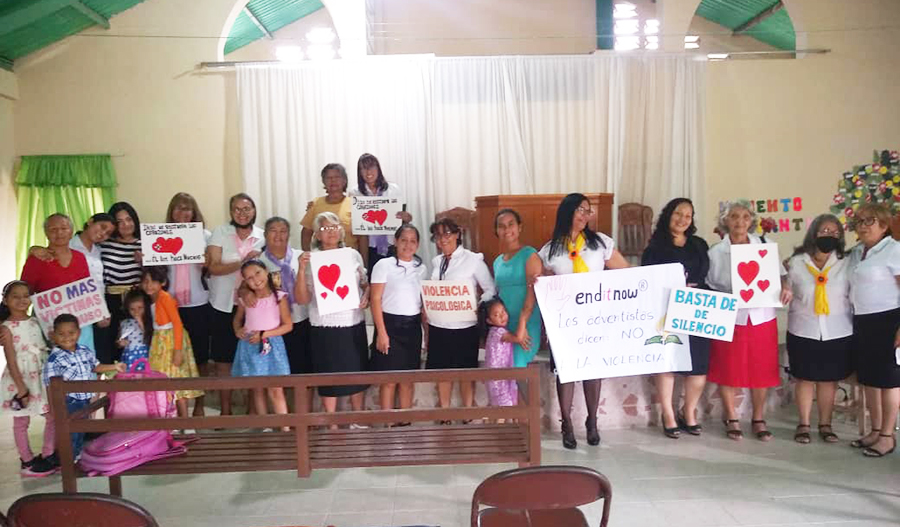 Church members display their Enditnow posters before they take off to march through their community on Aug. 27, 2022. [Photo: East Venezuela Union]

“We are living in a world full of fear and mistreatment and we want there to be peace in the home, in our churches, and, above all, in our lives,” said Reina Longart, women’s ministries director in the Southeast Venezuela Conference. The radio programs that were aired explaining the existing mistreatment whether physical, psychological, and emotional were a big hit, she added. “This is the time to love more, to understand that our homes should be a little piece of heaven on earth.”

In Chiapas, Mexico, hundreds of women took to the streets not only with signs and posters on ending violence but also carried bags of food and literature to distribute in the community. Women visited the sick in hospitals, brought gifts, and sang and prayed with them.  The day’s impact under the Enditnow theme saw Seventh-day Adventists also distributing water, meals, and clothing. They also prayed with onlookers and offered free medical check-ups to low-income families in dozens of communities. 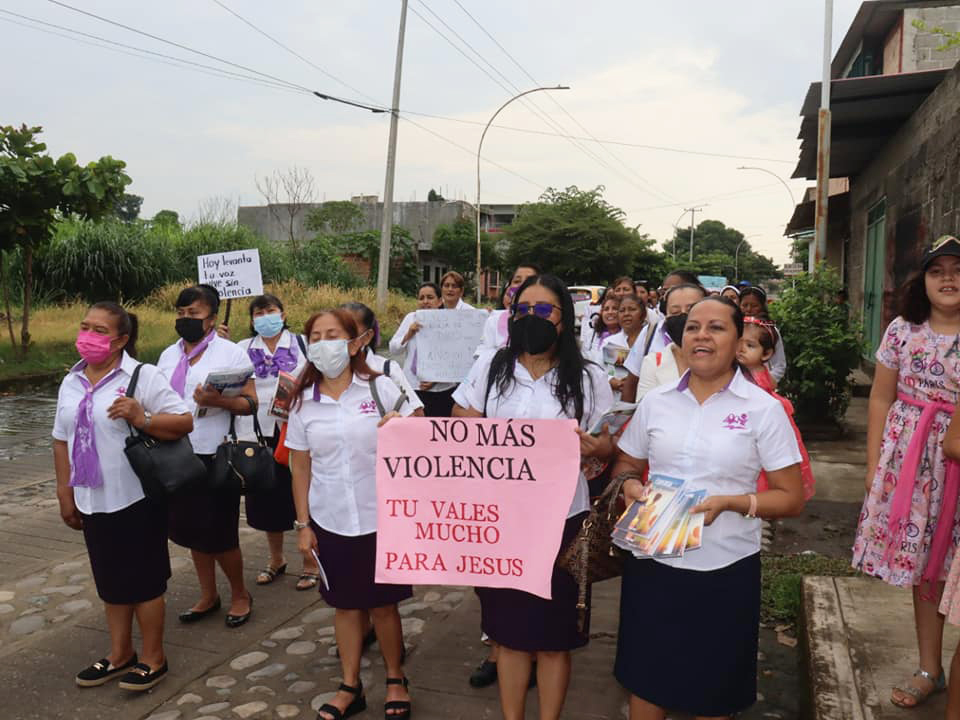 Women in Chiapas march through the streets of their community and distribute literature to onlookers and visit homes, Aug. 27, 2022.[Photo: Chiapas Mexican Union]

“It’s a great joy to see so many of our members involved in this important initiative to reach so many women and children who need assistance in facing abuse and encouraging them to put a stop to violence,” said Laura Minelly Ruiz, women’s ministries director of the Chiapas Mexican Union.

Guatemala also saw hundreds of members young and old spreading the Enditnow message across each one of the eight conferences and missions operated by the church.

“Each year the statistics on violence against women and children are very alarming,” said Lety Martínez, women’s ministries director of the Guatemala Union. “There’s an average of 27 homicides for each 100,000 inhabitants in Guatemala, according to a recent national report.” Out of the 363 homicides reported in January, 54 victims were women, she said. “It’s alarming that Guatemala recorded a total of 652 femicides, which is 28 percent higher than in 2020. It was important to continue spreading awareness as a church throughout our country.” 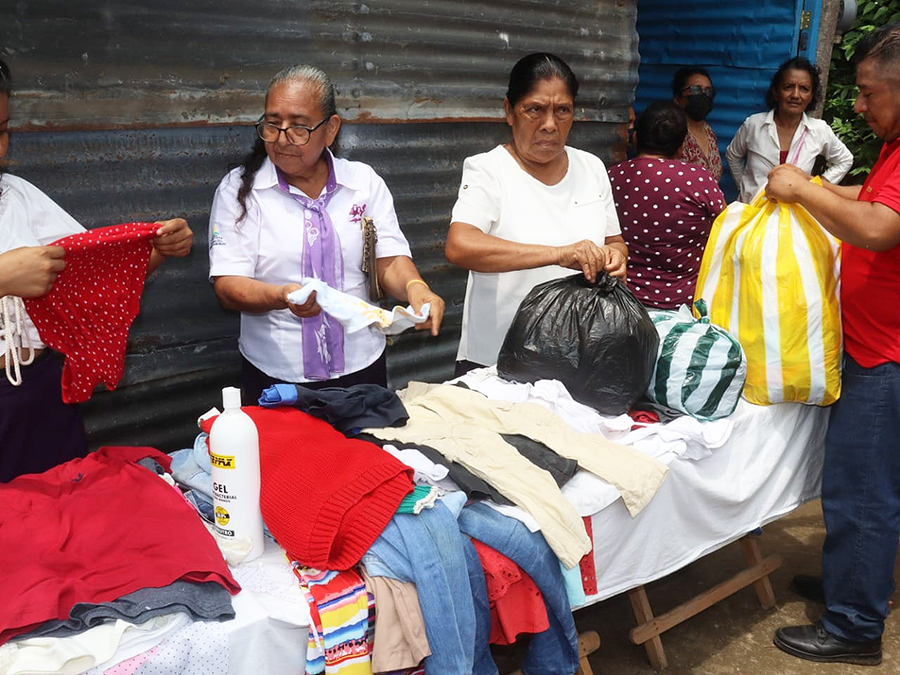 Women ministries leaders in Chiapas, Mexico, sort out clothes to give out in a needy community as part of the Enditnow marches across the state on Aug. 27, 2022. [Photo: Chiapas Mexican Union]

Adventist churches held seminars and special programs on how to identify and prevent abuse, and how to look for help and support.

Church members across the Caribbean islands marched throughout the streets against domestic violence and abuse of any form. St. Vincent and the Grenadines members marched and held a rally. They spoke on the church’s commitment to advocating for an end to violence against women and children  – and not just during the annual Enditnow campaign.  In Antigua, Pathfinders marched through the main streets against violence of all forms bearing signs and posters. 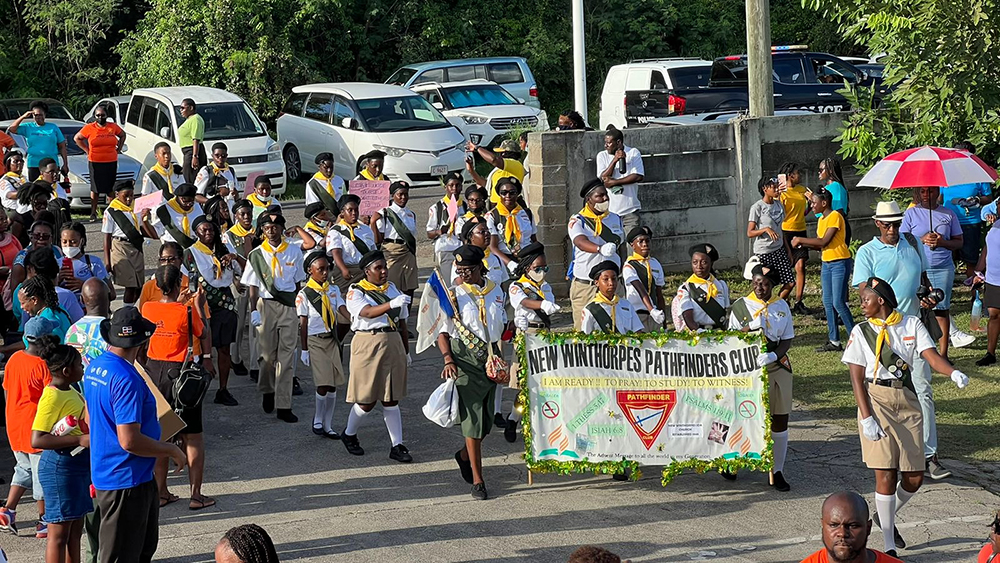 Pathfinders on the Island of Antigua march through the main streets against violence of all forms. [Photo: Leeward Islands Conference]

Hundreds across The Bahamas, Cayman Islands and Turks and Caicos took to the streets and gathered in rallies for ending violence.

Jamaica saw hundreds of master guides and youth leaders in the streets to raise awareness in support of Enditnow.

Church members joined the uniformed group in Mandeville, Manchester, marching from the Mandeville Seventh-day Adventist Church to the Town Center, distributing literature to motorists and those they passed along the way. 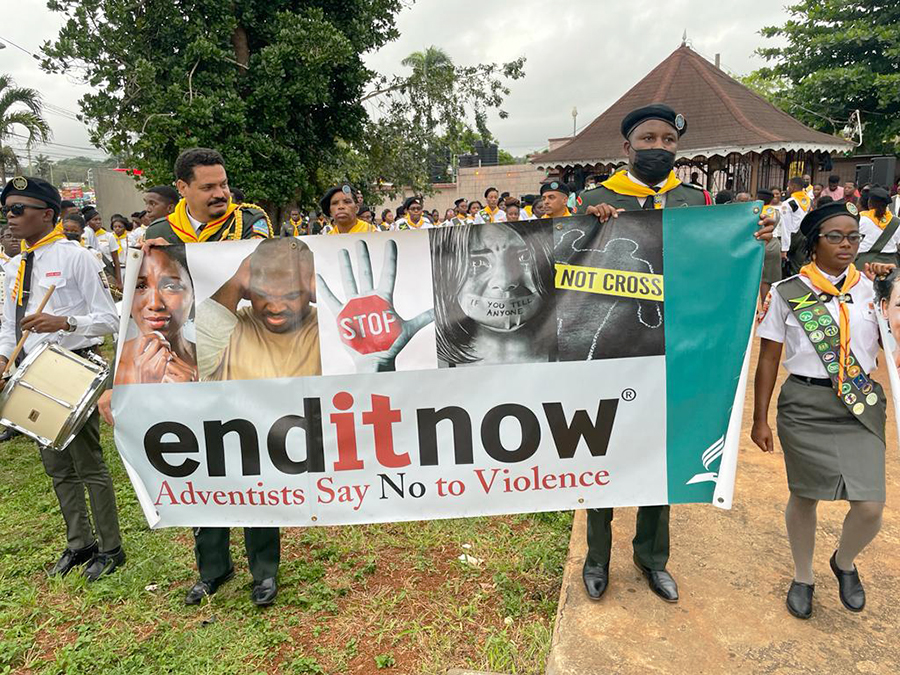 Master guides and youth leaders in Jamaica take part in an Enditnow march through the streets of Mandeville, Aug. 27, 2022. [Photo: Jamaica Union]

“We are here to say no to abuse in all its forms through Enditnow,” declared Pastor Dane Fletcher, youth ministries director of the Jamaica Union. It’s time to end abuse of power, spousal abuse, abuse of women and children, he said. “With your efforts to end violence, together we will create a more peaceful society, let us unite, and enditnow.”

From the World Church, RSS English
In Peru’s Jungle, Mission to Indigenous People Gets a Facelift