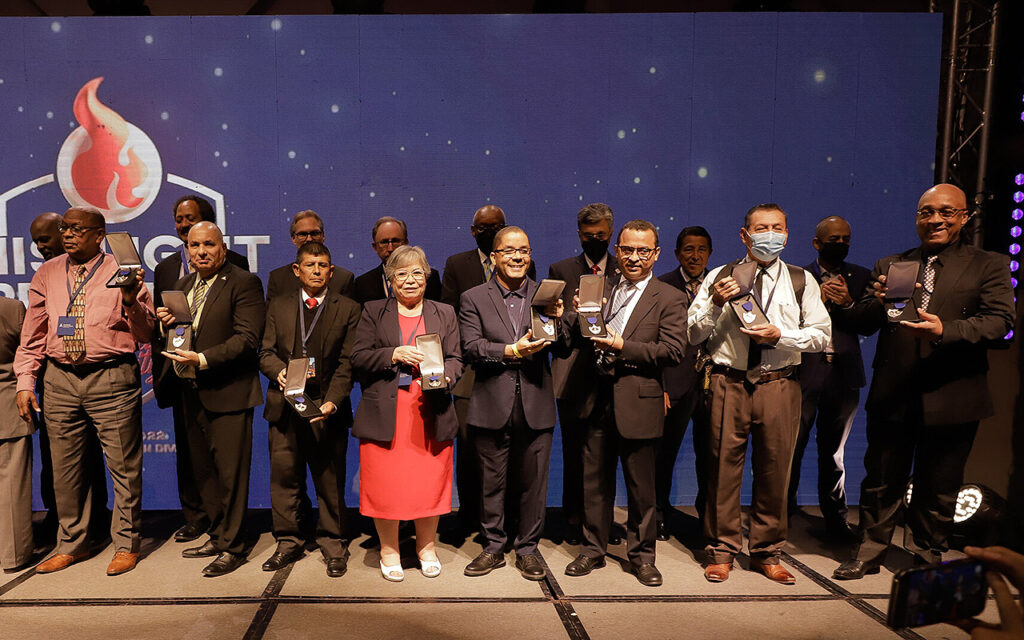 Part of the champion lay evangelists show off their medal after being honored during a special ceremony on the closing of Inter-American Division’s Festival of the Laity in Panama City, Panama, Aug. 6, 2022. [Photo: Ariel Morales/IAD]

Two dozen lay evangelists were honored for their outstanding service in leading hundreds of individuals to accepting the gospel at a special ceremony held during the last day of the Inter-American Division’s Festival of the Laity in Panama City, Panama, on Aug. 6, 2022.

Amid the applause, the notable laypersons who represented thousands of lay evangelists, lay preachers and lay bible instructors back home received medals, handshakes, and hugs for their service. 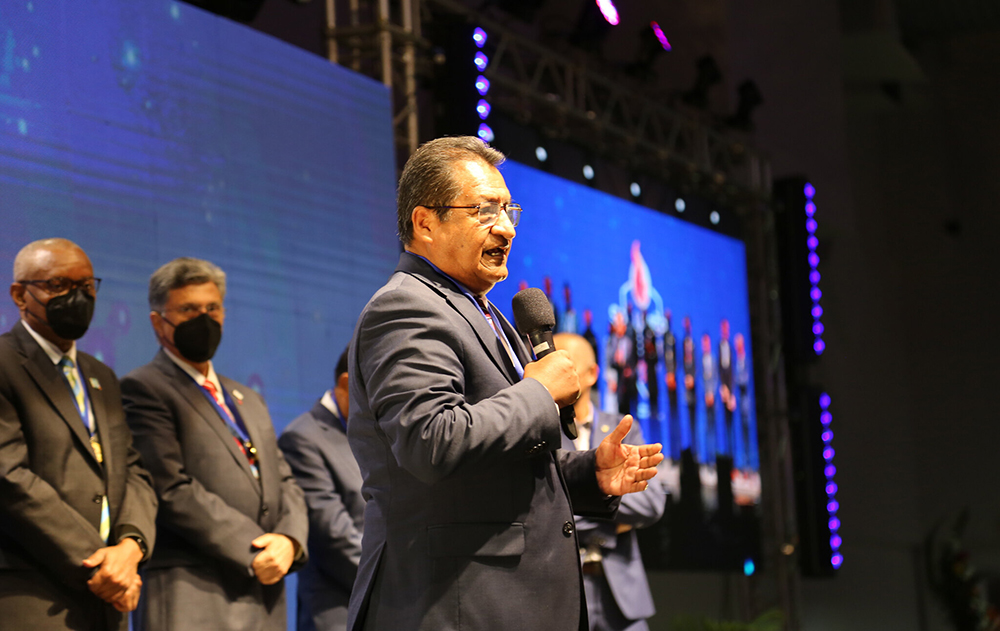 Pastor Melchor Ferreyra, personal ministries director for the Inter-American Division speaks on the outstanding work of lay evangelists, lay preachers and lay bible instructors who have lead hundreds to accepting the gospel this year and in the past three years. [Photo: Libna Stevens/AD]

“We want to honor the lay champions in Inter-America,” said Pastor Melchor Ferreyra, personal ministries director of the Inter-American Division. Chosen by each union territory, the awardees were handpicked by regional leaders as instrumental and integral part of expanding the church, said Ferreyra.

“There’s no doubt that our laypeople in Inter-America are the ‘living forces of the church.’ They minister together with local pastors to spread the message of hope to those who are in need of a Savior.”  That number surpasses one million laypersons or active church members across the IAD territory, he said. The dream is to have every member involved in evangelism, in becoming intentional about the gospel, in discipling others year-round, said Ferreyra. 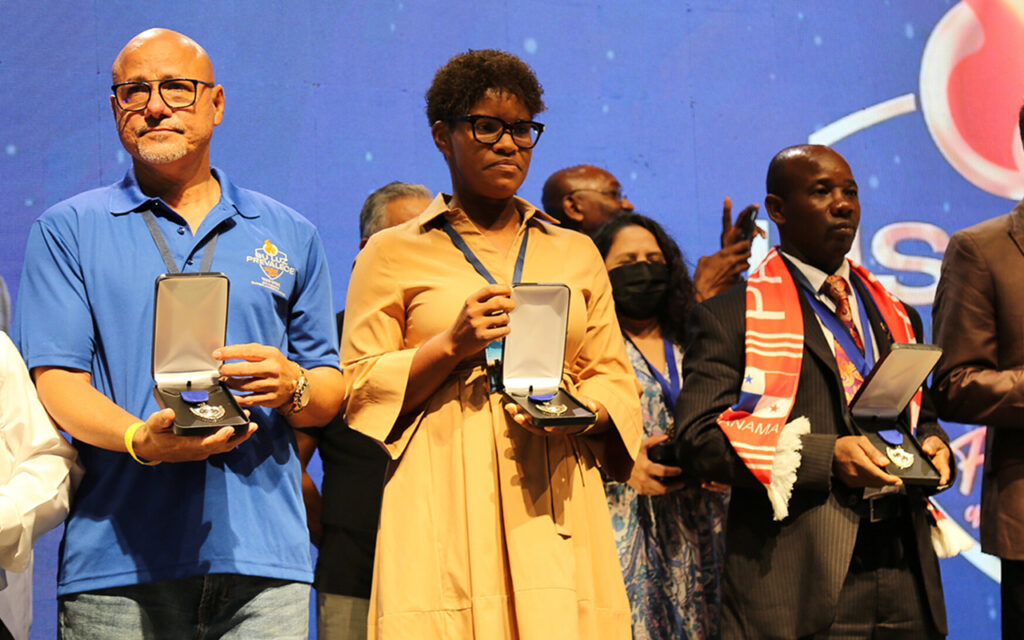 Roger Alleyne, who works for a power company in Tobago, decided to share the gospel soon after he was baptized in 1996. He became very involved in the church as an elder and lay activities leader. By 1998, he held his first evangelistic campaign and went on to assist evangelists throughout the English-speaking Caribbean.

He felt called by God to study theology at University of Southern Caribbean , where he graduated. Since 2016, he has been holding lay evangelistic campaigns in Guyana, The Bahamas, Tobago, Trinidad, Jamaica and Africa. “Some years I hold two or three campaigns, others five [campaigns],” he said. Alleyne has seen hundreds of people accept Jesus and their lives transformed. He keeps in contact with those who get baptized. 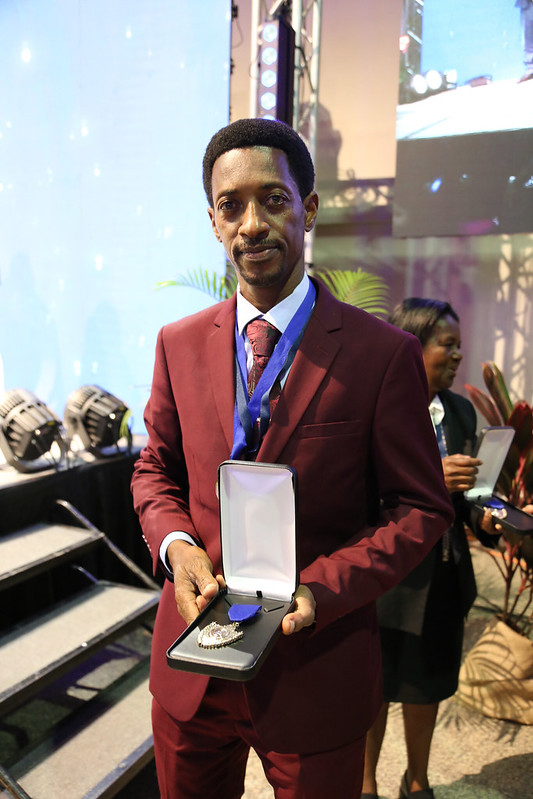 Lay Evangelist Roger Alleyne of Tobago in the Caribbean Union shows his medal minutes after he received it. [Photo: Libna Stevens/IAD]

“I love seeing people going to the Lord and change their life,” said Alleyne. Many have graduated with honors from school, some have called with thoughts of suicide, and others tell him about their struggles and strides, he added.

As a lay evangelist, he uses many of the vacation weeks he has to focus on public evangelism, mostly in tent campaigns that last up to four weeks. “Tent campaigns bring out the best in me. I know the street life and it’s easy for me to relate to people out there,” said Alleyne. He was born into another Christian denomination. He said he studies the life and ministry of Jesus all the time and tailors his biblical messages to those struggling through difficult situations. 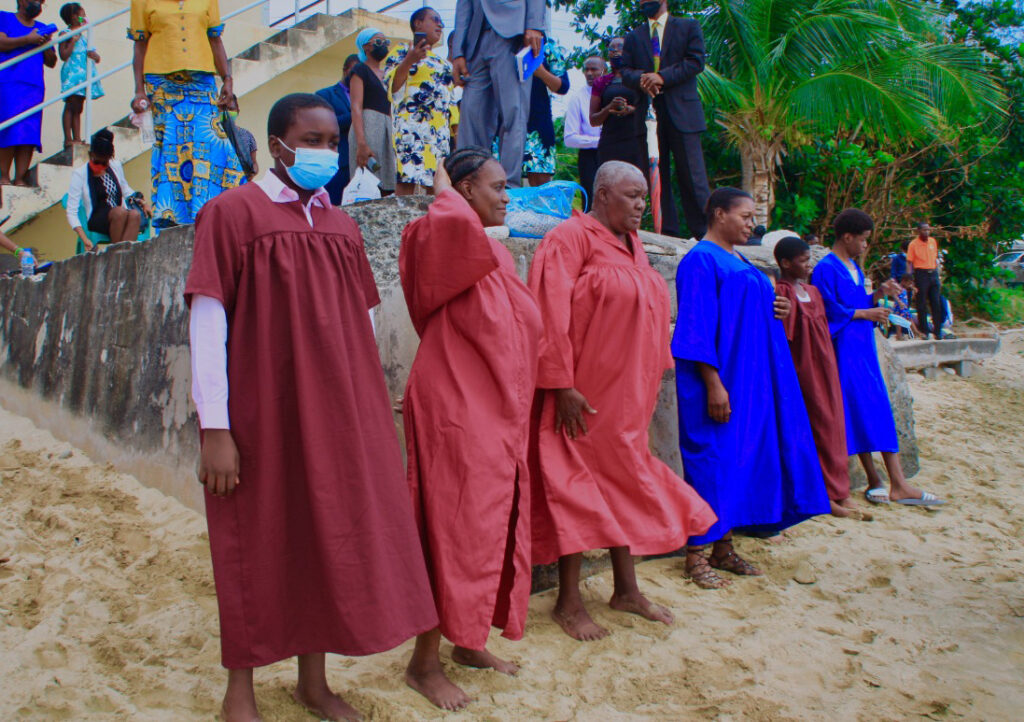 Six of a group of 16 new believers pause before they are baptized on the Mt Irvine Beach in Tobago, in April of 2022, after Lay Evangelist Roger Alleyne finished a tent evangelistic campaign. [Photo: Keanne Leith]

Alleyne plans his evangelistic impact every year, incorporates plenty of technology to bring about illustrations and lets God prepare the way. His wife Natasha is an attorney, and takes time off to minister as a lay evangelist, sometimes traveling with him to do public evangelism. His motto is “Fix God’s business and God will fix your business,” Alleyne said. “We need to ‘get going’ so we can advance the mission of the church while we still can.”

Misael Artunduaga Castro of Colombia has been a dedicated lay bible instructor for 12 years. He lives with his family near the eastern plains of south Colombia, where he has been ministering to several indigenous communities since 2019.  Artunduaga felt a calling from God to witness and share the gospel in dozens of ethnic communities near the border with Brazil and Venezuela. “There are 68 different language groups and so far, dozens in three of those groups have accepted the message of the gospel,” he said. It’s taken time connecting with indigenous communities, finding out their needs and sharing clothes, foods, and things they need. “I don’t know their language but some know a little Spanish, or make friends with the leaders in the community and the Lord allows His message to get through,” said Artunduaga. 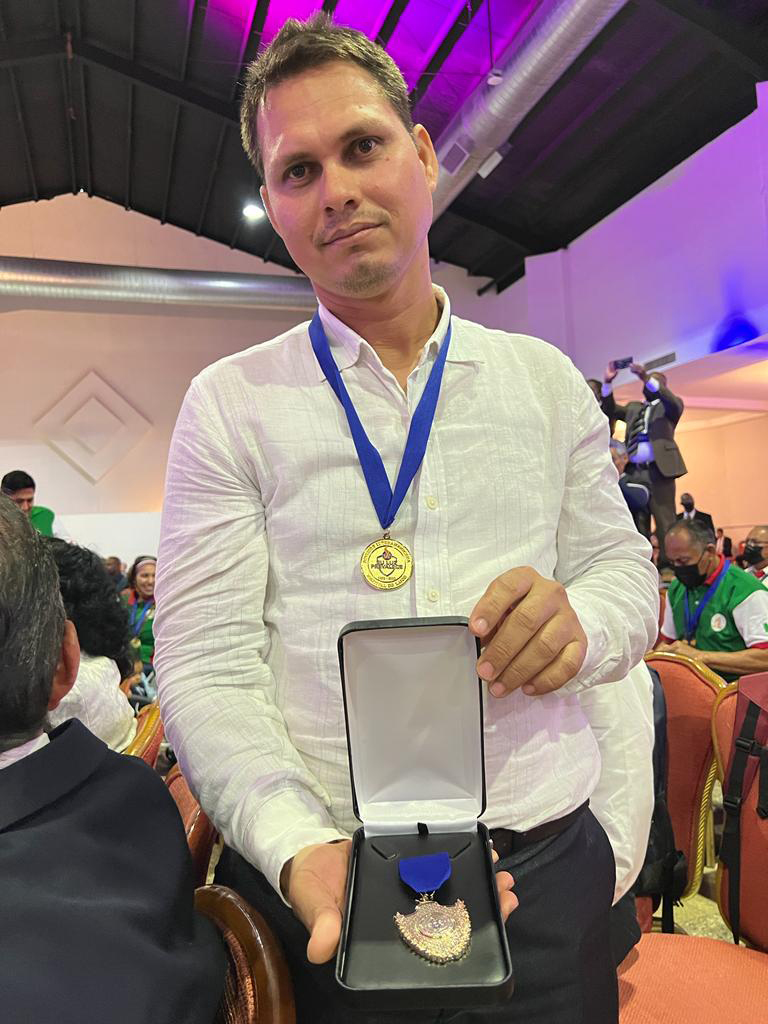 Champion Lay Bible Instructor Misael Artunduaga of the South Colombia Union shows off his medal during the festival of the laity, on Aug. 6, 2022.[Photo: Courtesy of Alvaro Niño]

Three weeks out of every month, he gets on a motorbike loaded with goods and travels with one or two others who help in the lay ministry. Some communities are as far as 13 hours away. “We sleep on hammocks, eat with them and share the Word of God.” It’s all about mingling with them and gaining their trust and loving and accepting them, he said. “I’m a vegetarian, but what they give me to eat while I’m with them, I eat. That could be a small fish or whatever they have.”

Thanks to the work of Artunduaga, the Adventist message entered the Sikuany community in 2020 and the Sábila group in 2021. He is focused this year on reaching the Unuma community.

“We don’t have 68 years to reach each of the languages spoken within these communities,” he said. “More resources to build houses of worship and more committed members engaged in providing health brigades are needed.” 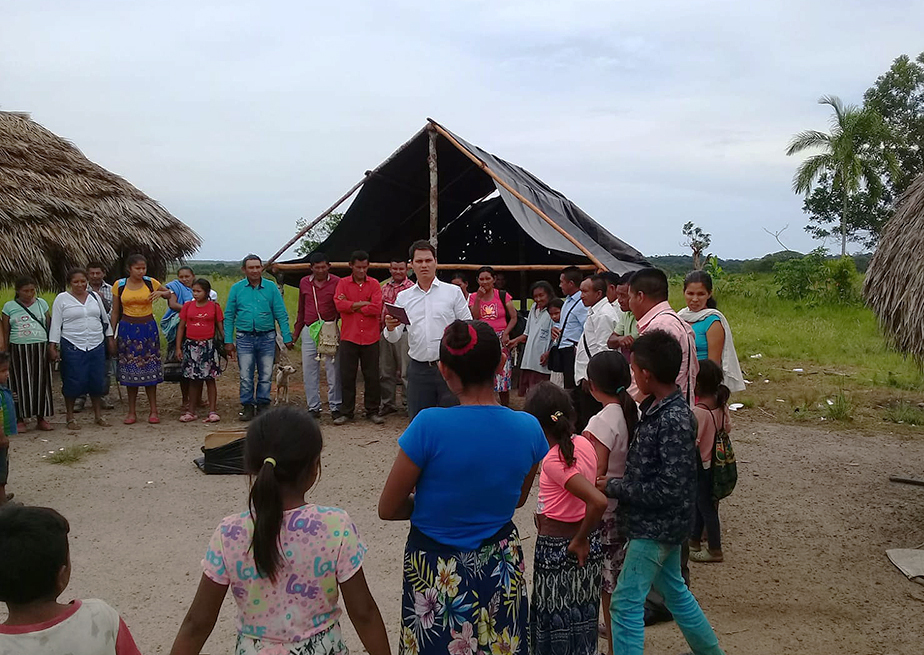 Misael Artunduaga speaks to the Sikuany speaking community on a recent Sabbath day t in the Vichada department in the eastern plains of Colombia. He has been visiting the community since 2019 in addition to other indigenous communities in the region. [Photo: Courtesy of Misael Artunduaga]

Artunduaga has estimated that he has baptized between 350 to 400 new believers since 2019.  He has a passion to reach more of the indigenous groups and dreams of building 11 churches they need today.

As he saw the dozens of flags flown during the three-day festival of the laity, he imagined 68 flags representing each of the indigenous groups.

Several years ago, Artunduaga asked God to give him strength and allow the different groups to somehow understand him when he spoke. “All we have to do is surrender our lives and our will to God, and let Him strengthen us,” said Artunduaga. “He does the rest.”

Artunduaga is a true champion who has single-handedly penetrated many communities with the gospel, said Pastor Alvaro Niño, president of the church in the South Colombia Union. “The church has been really blessed by his ministry.” 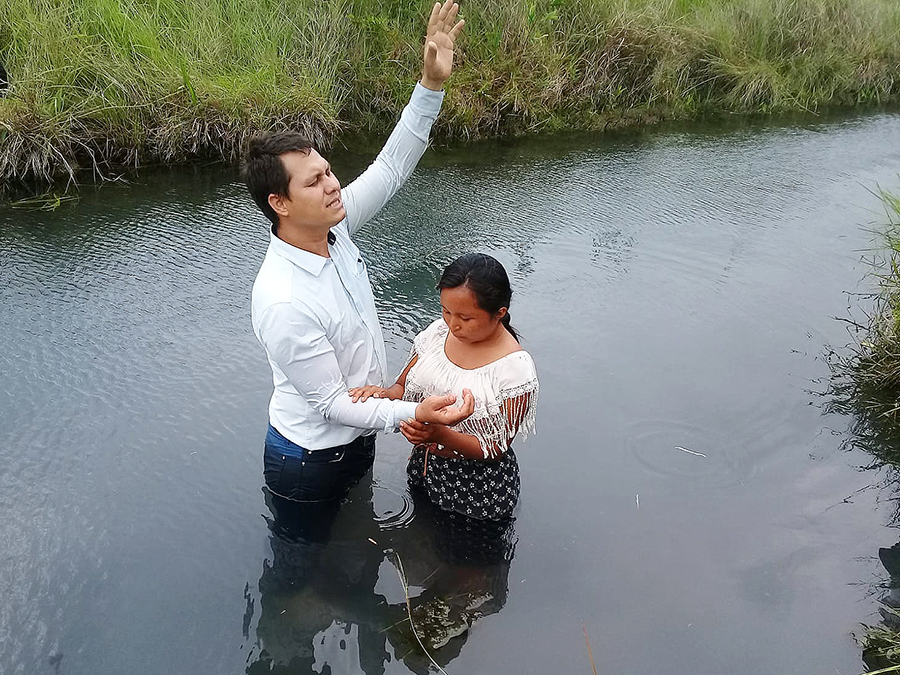 To view the online program of the IAD’s Festival of the Laity, and more, visit festival.interamerica.org

To view a photo album of the event, Click HERE