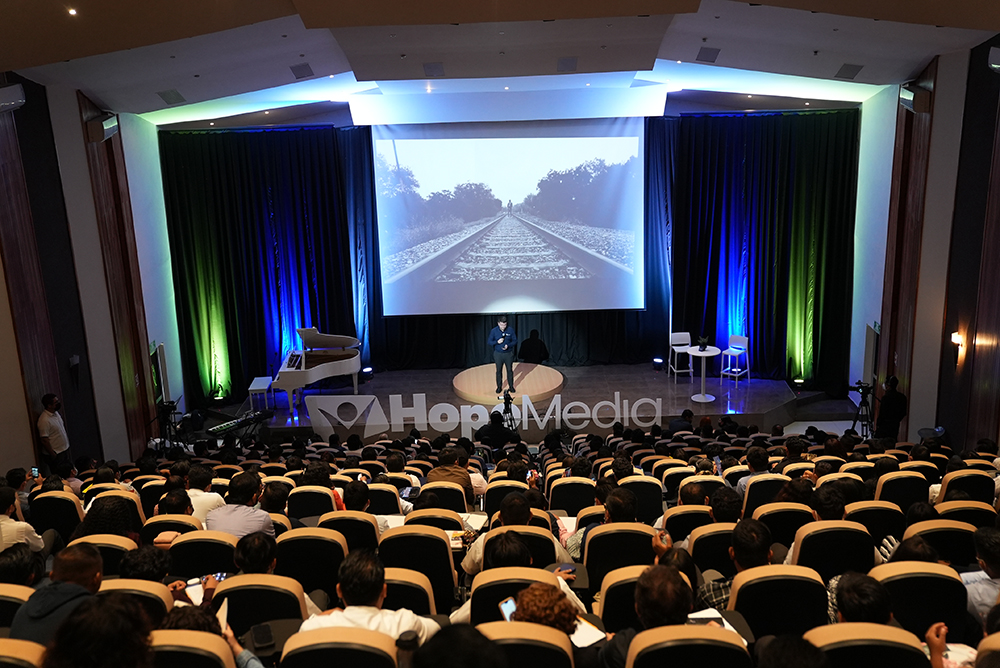 Hundreds gathered in Tuxtla Gutierrez, on the last day of the seven-day communication and hope media training event throughout Chiapas Aug. 21-27, 2022, as part of the comprehensive strategy by Seventh-day Adventist leaders to engage young people in digital evangelists to fulfill the mission of the church. [Photo: Chiapas Mexican Union]

The Seventh-day Adventist Church in Chiapas, Mexico is serious about providing opportunities for hundreds of young people across the region to become digital evangelists. During a recent communication training, more than 800 young people from hundreds of local churches met to create or optimize their digital ministries on social media platforms to spread the message of the gospel.

The one-day training saw hundreds gather at five different locations throughout Chiapas, Aug. 21-27, 2022, to learn how to be creative disciples when producing short films, taking photographs and videos with their smart phones, writing news stories and more. Church leaders called it the Communication and Hope Media training tour. 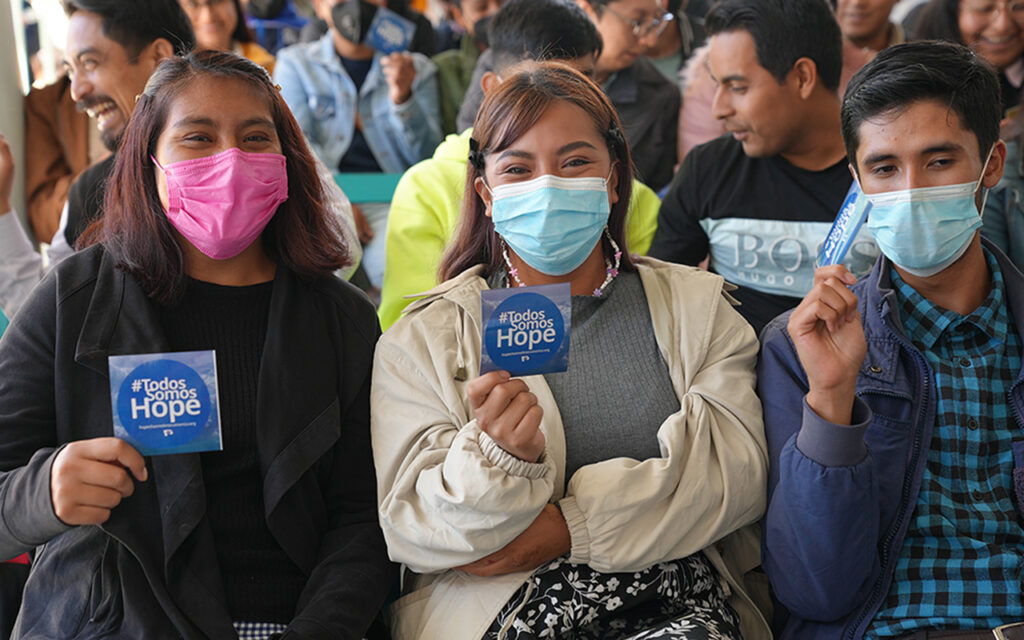 “This training tour was very important because we want the new generations to be involved in sharing Jesus with what comes very natural to them,” said Daniel Torreblanca, communication, and youth ministries director for the church in Chiapas. “Young people know more about technology than what we can imagine and even though many didn’t have the latest tools to share the gospel effectively, there was an impressive willingness to learn among them.”

They took notes at every presentation and showed a willingness to put their gifts and talents to the service of God, said Torreblanca. 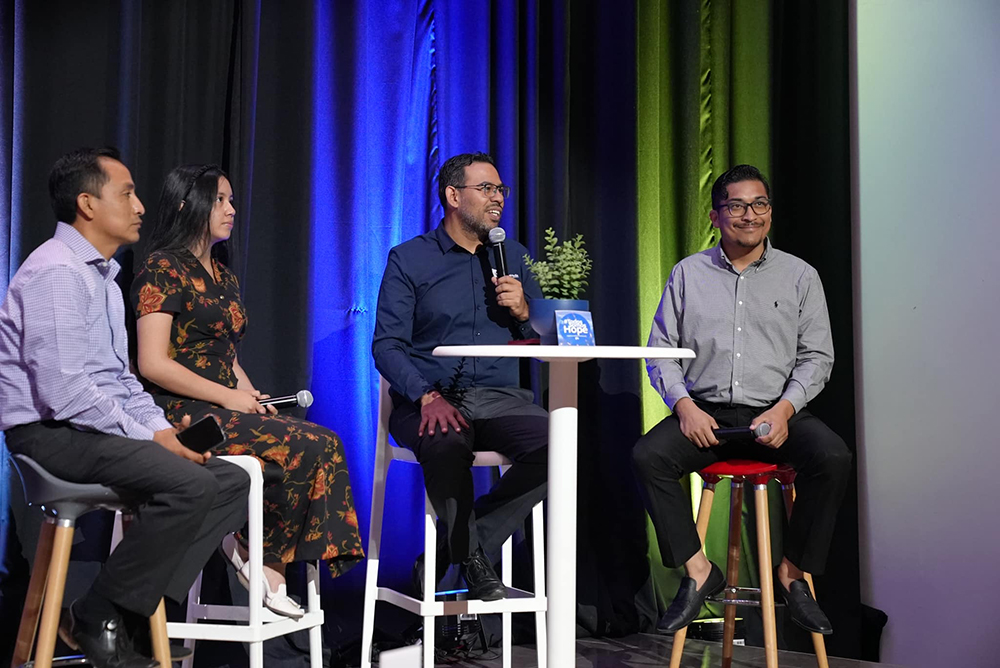 Carlos Florentino, who has a rubber business near the border with Guatemala, travelled hundreds of kilometers to meet in Palenque for the training early during the morning of Aug. 23. He shares messages of hope to the 700 followers on his Facebook page. During evangelism efforts in his church, he shares sermons and spiritual messages from his mobile phone.

Many young people committed to starting a new digital evangelism ministry with a group from their local church. “A young man told me that after the training he had spoken to two friends from church and they decided to begin a short film project,” said Torreblanca. “They knew they didn’t have the experience to do that, but if they didn’t start right away, they would never do so, so I encouraged them to start right away.” 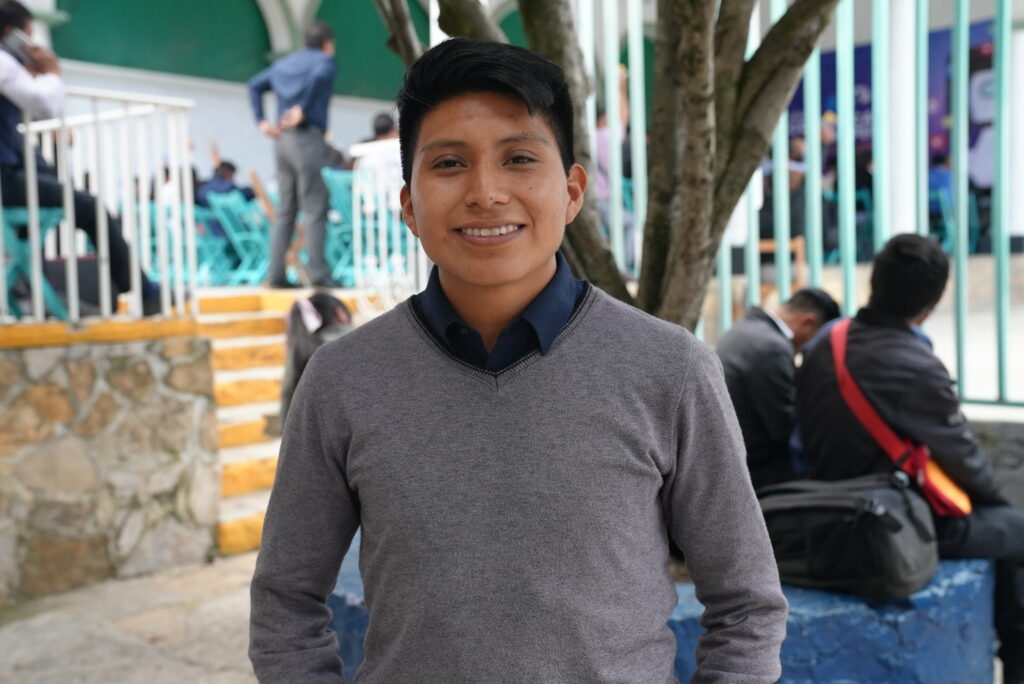 Carlos Lunez a trail runner from San Cristobal de las Casas decided to delete all the meme content in his 7,000 plus followers on Facebook to replace with healthy lifestyle content after attending communication training [Photo: Chiapas Mexican Union]

Letting young delegates see their potential and input in leading others to Christ was at the core message during the seven-day training tour, said Torreblanca. “We want them to know and believe that ‘Todos Somos Hope’ [We are all Hope], a team of ambassadors for Hope Channel Inter-America, part of the church’s Hope Channel television network, and can bring about change in other people’s life for God,” he said.

Carlos Lunez, a trail runner from San Cristobal de las Casas, decided to delete all the meme content on his Facebook page of 7,000 followers and change to healthy lifestyle content. “I decided to share a message of hope and well-being to many who are suffering in a world full of anxiety and depression,” said Lunez. I believe that through this new ministry I can help and lead people to Christ.” 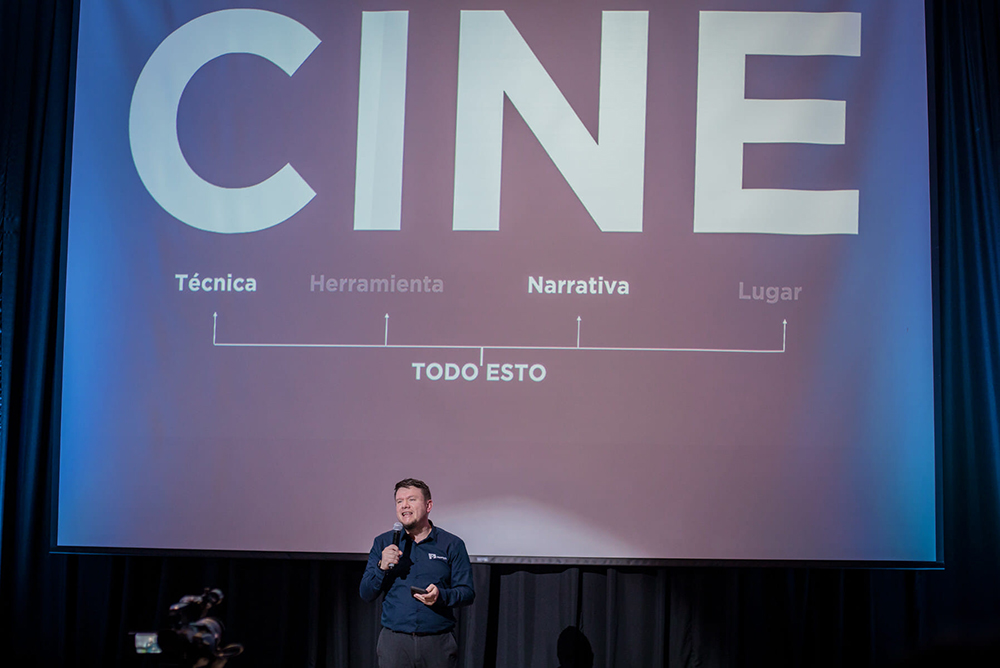 Alan Mendoza, a third-year communication student in Tuxtla Gutierrez, was fascinated by the cinematography and television productions created throughout the different parts of the world church and was inspired to create audiovisual projects with a group of his peers on the subject of sharing hope.

The whole point was to encourage young members to support evangelism efforts across Chiapas with a digital ministry of their own, explained Torreblanca. The training sessions were part of a comprehensive strategy set out by leaders since 2019 where communication and media training were offered to teams of young people across the eight local fields which were provided with a camara to begin creating content, he said. 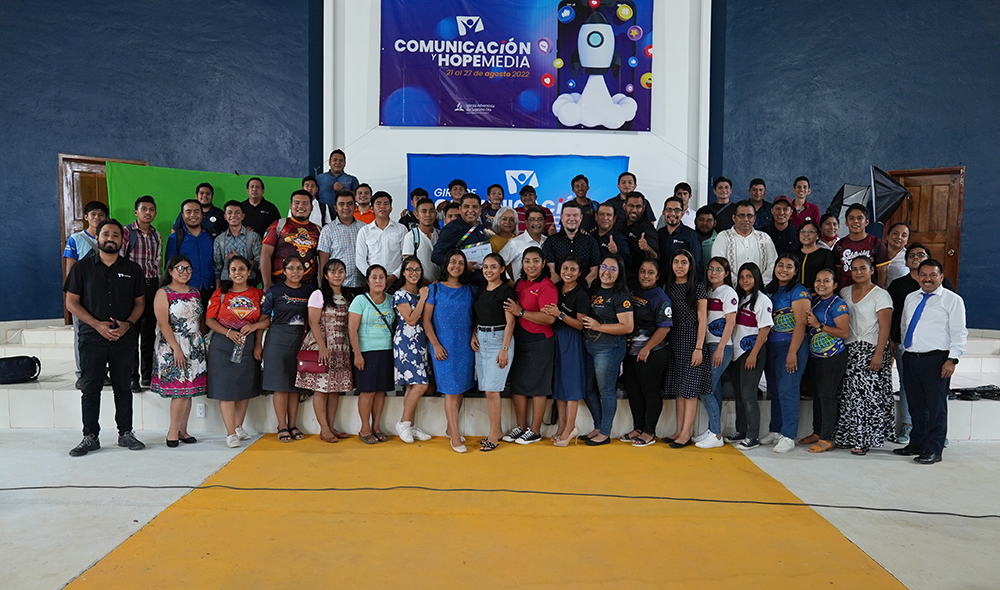 A group of young people from Pichucalco in North Chiapas pose for a group photo after completing training session on Aug. 24, 2022.  [Photo: Chiapas Mexican Union]

“When the pandemic hit soon after that congress training and churches closed, they used those tools to strengthen the church during the months and years after,” said Torreblanca.

Opportunities in support of the mission

President of the Adventist Church in Chiapas Pastor Ignacio Navarro congratulated young people for their dedication to and gifts in support of the mission of the church. “The youth in Chiapas are very dynamic,” said Navarro. “When they are focused and trained to use the media, they will create a gospel preaching movement. I am sure that the Lord has allowed the gospel to be known by many in our state through social media networks and the media.” He challenged the youth to snatch the use of these platforms from the hands of the enemy and deliver them into the hands of the Holy Spirit for the culmination of the mission. 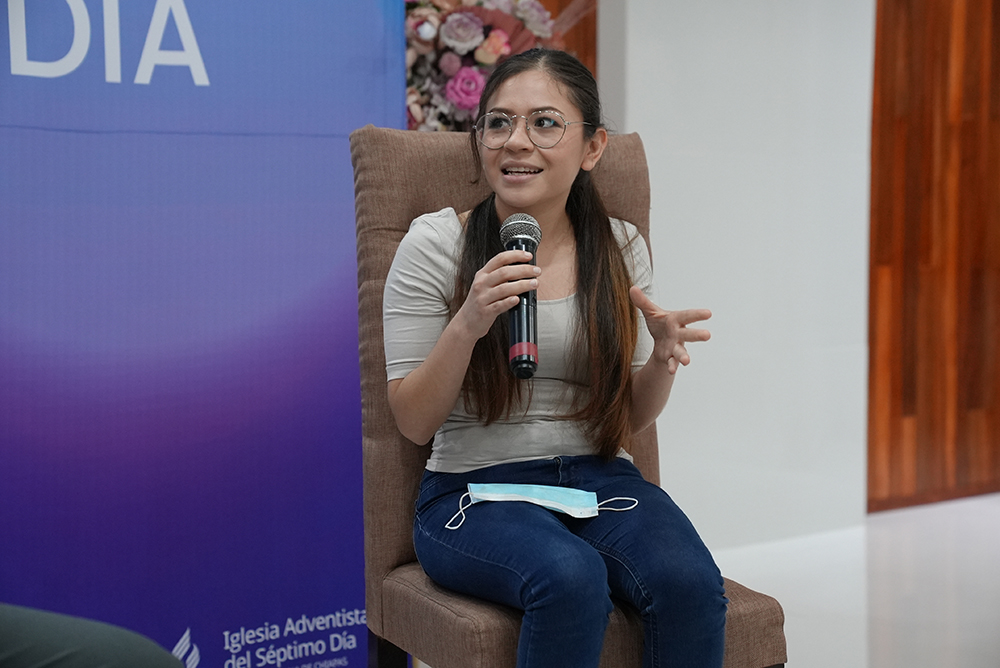 Abel Márquez, communication director for the church in Inter-America and executive director of Hope Channel Inter-America, praised church leaders in Chiapas for their long-term vision to set up a media center in each of the eight local fields and institutions to continue generating innovative content to share hope.

Márquez, who spoke during the seven-day training sessions in Chiapas, said the event was significant because it opened the opportunity for churches and members to be involved in producing local programming, and also collaborative projects in other parts of the world. “I want to motivate you to produce something every day. Use your creativity, talents, and tools at your reach to preach that Jesus is coming soon.” 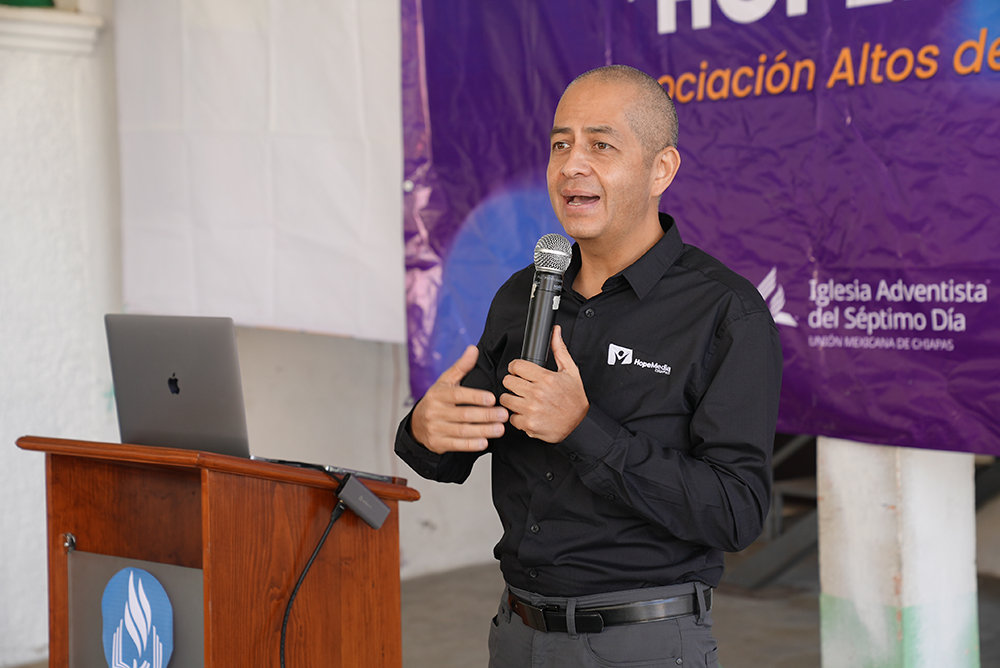 The training event is the first one of such a magnitude to be held across Inter-America, said Márquez. “Hope Media Chiapas, as a production center which produces and promotes Hope Channel Inter-America, is positioning itself as a network throughout the State of Chiapas, that now includes representation in each local church. That is an un precedented initiative,” he said.

Church leaders will continue to encourage its young church members to share hope throughout their social media communities. The Chiapas Mexican Union is planning to hold a territory-wide Global Adventist Internet Evangelism (GAiN) event to continue encouraging its digital evangelists to produce content that leads others to Christ and wants to expand its media center in the coming months and year, Torreblanca said. 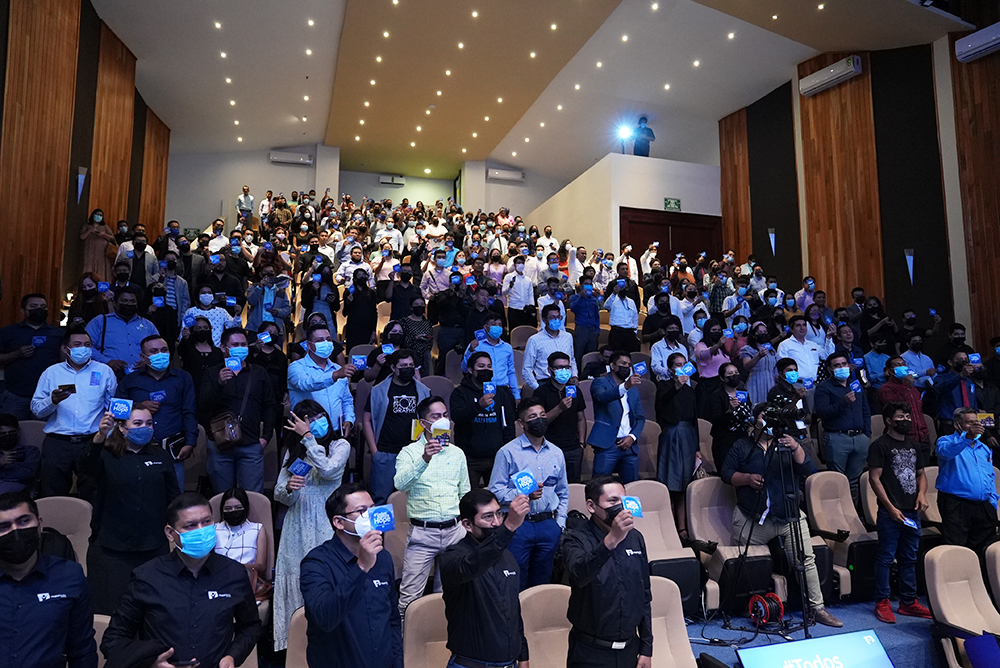 Hundreds of young people from the central, west, and Grijalva regions in Chiapas gathered in Tuxtla Gutierrez, the capital city of Chiapas, for session training on Aug. 27, 2022. [Photo: Chiapas Mexican Union]